A Gunpla used by Kyoya Kujo and based on the Gundam AGE-2.[1][2][3] The Gundam AGEII Magnum is a hi-spec kit customized to fit Kyoya's highly skilled battle style.[1][2][3] Its name was changed to the AGEII from AGE-2 with the aim of becoming a next generation mobile suit that surpassed the AGE System.[2][3]

Besides an upgraded basic structure, the Gundam AGEII Magnum also has added offensive capabilities in its wings and shield.[1][2][3] This enabled the Gunpla to be a super-offensive type that can pivot instantly to attack from any situation or posture.[1][2][3] The high-speed flight form of the Gundam AGE-2 is upgraded into the Phoenix Mode, making this a perfect model for the GBN Champion.[1][2][3]

Based on the Gundam AGE-2's Hyper DODS Rifle, it not only has the ability to rotate beams in a drill form for more destructive power, but is also upgraded with larger energy charging capacity per shot, making it even more powerful.[2][3] In Phoenix Mode, the weapon becomes the nose unit and its power by-pass changes to a direct connection, resulting in higher energy consumption but also greater firepower.[2][3] Can be stored on the rear skirt armor during MS mode.[4]

When the Gunpla was equipped with outer parts and disguised as a AGE-2DH Gundam AGE-2 Dark Hound look-alike, the Hyper DODS Rifle Magnum was fitted with parts to resemble the Dark Hound's DODS Lancer and can be used to pierce enemy Gunpla.[5] Like the DODS Lancer, it also had a pair of DODS Guns as its primary range attack.[5]

A defensive armament mounted on the forearm's hardpoint.[2][3] Over half of the shield is a blade, and apart from being used as a sword, it can also be used for a technical fighting style, such as attacking while in a defensive state.[2][3]

The four F Funnels are close combat weapons capable of deflecting beam shots, and consist of blades incorporated into the wings.[2][3][5] Inspired by the AGE-FX Gundam AGE-FX's C Funnels, they can serve as remotely controlled armaments and are deployable even in Phoenix Mode.[2][3] When functioning as remote weaponry, they can assume a formation surrounding the Gundam AGEII Magnum and be used to perform formation attacks even though the Gunpla is by itself.[2][3] They are also utilized in the finish move, EX Caliber.[3][5]

When the Gundam AGEII Magnum was equipped with outer parts, it had a pair of Anchor Shots-like weapon on its shoulders.[5] This wired anchor can be used to grab onto enemy units.[5]

When Kyoya was investigating Mass-Divers intruding into the Serial Battle missions for low rankers, he disguised the Gundam AGEII Magnum with a set of outer parts that caused it to resemble the AGE-2DH Gundam AGE-2 Dark Hound.[5] Differences with the Dark Hound were visible in the front skirt armor, chest skull motif, shoulder wings, etc. The Hyper DODS Rifle Magnum was also disguised to resemble Dark Hound's DODS Lancer, and a pair of Anchor Shots-like weapon were equipped on the shoulders.[5] The outer parts for the head utilized parts from the Master Grade kit of the AGE-2 Dark Hound, and thus the head is proportionately larger.[6]

Kyoya's finish move.[3] The F Funnels combine and shoot into the sky, concentrating a massive amount of energy to create a large, golden, energy blade that is linked to the Shiguru Shield.[3][5] The powerful blade can destroy a giant enemy Gunpla, like the miscolored JDG-00X Devil Gundam, in one strike.[5][4]

With Kyoya in first opening 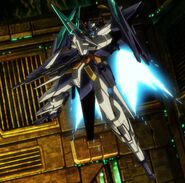 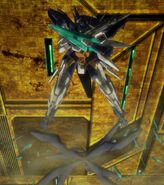 After defending an attack (Prologue) 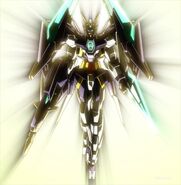 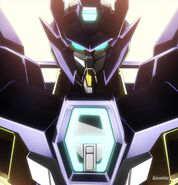 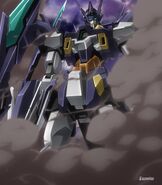 Victory celebration with the Coalition of Volunteers (Ep 12) 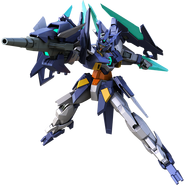 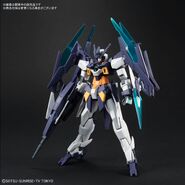 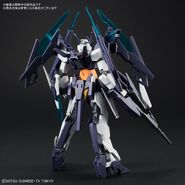 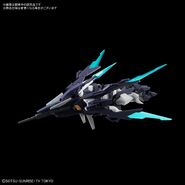