A decisive battle version of the Gundam AGEII Magnum.[1] The super offensive characteristics of the original Gunpla are enhanced, with new armaments and a new mode added for aerial/outer space one-on-one combat.[2] The new armaments also enhanced the Phoenix Mode's combat capabilities, and consisted of two Beam Vulcans on the side armor and a pair of SigMaxiss Funnels on the back.[2] The new mode, the FX Plosion, is based on the FX Burst of the AGE-FX Gundam AGE-FX.[1][2]

Additional units are also added to the legs to boost the Gundam AGEII Magnum SV ver.'s mobility in aerial/outer space combat, and they can be used as striking weapons due to their robust structure.[2] These units can unfold and turn into 'Ground Mode' when the Gunpla needs to land on the ground.[2]

An overhaul of the Gundam AGEII Magnum's parts was conducted during the building of the Gundam AGEII Magnum SV ver., and although this has no effect on the Gunpla's capabilities, it does increased its level of completion.[2] This then resulted in a power-up due to additional bonus points given to the Gunpla when scanned in GBN.[2] Its new white color scheme is based on the colors of the AGE-2 Gundam AGE-2 Normal SP ver.[2] The "SV" in its name carries the meaning of "Savior" as well as "Saver".[1][2]

The same rifle as used by the Gundam AGEII Magnum. It is more powerful than the AGE-2 Gundam AGE-2 Normal's Hyper DODS Rifle, which the weapon is based on, due to having larger energy charging capacity per shot. In Phoenix Mode, the weapon becomes the nose unit and draws power directly from the Gundam, resulting in higher energy consumption but also greater firepower. Can be stored on the rear skirt armor during MS mode.

The same defensive armament mounted on the forearm's hardpoint as the Gundam AGEII Magnum. Over half of the shield is a blade, and apart from being used as a sword, it can also be used for a technical fighting style, such as attacking while in a defensive state.

Rapid firing beam guns added to the side armor.[2][3] Their bases can rotate back and forth in MS Mode, enabling them to shoot in any direction.[2][3] Also usable in Phoenix Mode, where they face forward.[2]

Large remote weaponry which open up their claws to fire beam shots.[2][3] These beams have the same characteristics as those fired from the SigMaxiss Long Cannon used by AGE-3O Gundam AGE-3 Orbital, which are special beams that can be bent via electromagnetic interference, allowing them to serve as guided weaponry.[2][3] Usable even in Phoenix Mode.[2] The engines of the funnels are used when mounted on the Gunpla's back, greatly enhancing its propulsion capabilities.[2][3] Can be included in the finish move, EX Calibur.[3]

A special mode unique to the Gunpla, which is based the Gundam AGE-FX's FX Burst.[1][2] Where the FX Burst allows the Gundam AGE-FX to demonstrate maximum mobility at the cost of risking the functions of the control system, the FX Plosion is tuned to a point where the risks are even more severe, where its activation guarantees a malfunction in some way or form, making it a double-edged sword.[2] The output of the surplus beam saber-shaped energy emitted during the transition to the mode have also been increased, slicing through any kind of armor that comes into contact.[2] The Gundam AGEII Magnum SV ver. glows blue in this mode, and its speed is on par with GN-0000DVR/S Gundam 00 Sky's Trans-Am Infinity[3]

Kyoya's finish move. The F Funnels combine and shoot into the sky, concentrating a massive amount of energy to create a large, golden, energy blade that is linked to the Shiguru Shield.[4] The powerful blade can destroy an enemy unit in one strike.[4] The SigMaxiss Funnels can also be deployed alongside the F Funnels in the formation of the blade.[3]

The Phoenix Mode of Gundam AGEII Magnum SV ver. is wrapped by the Wings of Light of 00 Sky in "Higher Than Sky Phase", and transformed into an unique, golden five-pronged blade for slicing apart large enemy unit.[5]

History of the Gundam AGEII Magnum SV ver. can be found on Kyoya Kisugi's page

With Kyoya in second opening 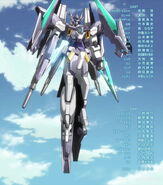 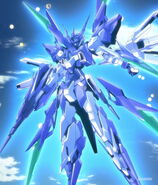 Being transformed by the Unnamed Combo Move (Ep 25) 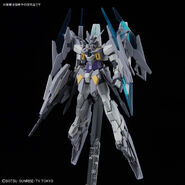 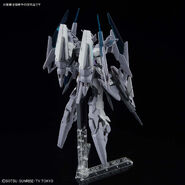 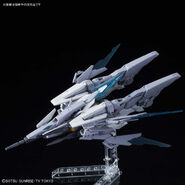 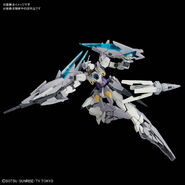 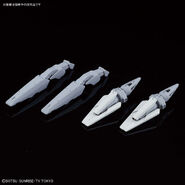