The AGE-FX Gundam AGE-FX is one of the four titular mobile suits and the successor of the AGE-3 Gundam AGE-3 Normal. Appearing in the Three Generation Arc of Mobile Suit Gundam AGE, it is piloted by Kio Asuno.

The AGE-FX Gundam AGE-FX is developed from Gundam AGE-3's combat data following the battle in the Mars Sphere and is the most powerful unit among the Federation's Mobile suits. It reflects all the data regarding the Gundam's evolution, boasting the most powerful fighting strength in the history of all Advanced Generation mobile suits.[1] Like the Gundam AGE-3, the backpack can be separated and operated as a Core Fighter. Unlike Gundam AGE-3's Core Fighter, where it serves as its head, core control system and the main propulsion system, Gundam AGE-FX's Core Fighter only has the last two functions. The wear system used in previous Gundams is completely removed, and the suit is made as light as possible for increased maneuverability.[2]

The most significant feature of the AGE-FX is its remote-controlled weaponry, the C-Funnels - physical blades that can be detached from the suit and be remote-controlled by its pilot. The Core Fighter can carry up to four of these C-Funnels (2 large and 2 small) when separated, giving it some form of offensive and defensive capabilities.[3] The "FX" designation stands for Follow X-Rounder, and refers to the fact that the suit is built specifically to keep up with the abilities of an X-Rounder pilot. Also, the C-Funnels require the use of one to be controlled properly. Its FX Burst mode raises the AGE-FX's mobility to the maximum.[4] Attacks in FX Burst mode have decreased accuracy, but enable the Gundam to defeat large groups of enemies alone, when used to its full potential.[4]

A beam saber can be emitted from each of the AGE-FX's arm shields for close combat.

Blade-shaped remote weaponry unique to the Gundam AGE-FX's and built with Shiguru Blade technology. The suit's Psycho-Follow System allows an X-Rounder pilot to wirelessly control the C-Funnels to attack multiple enemies at once. This is similar to how Vagan suits, such as Farsia, Ghirarga and Gundam Legilis, utilize their beam bits to attack multiple enemies. The blade antenna built at the back of the AGE-FX's head also play a role in controlling the C-Funnels. The AGE System developed this weapon after witnessing the effectiveness of the Gundam Legilis' remote controlled bits against the Gundam AGE-3. A total of 6 large and 8 small funnels are equipped around the suit. Usually, 2 large funnels are mounted on the Core Fighter and it can mount an additional 2 small funnels if required. The large C-Funnels can also be re-deployed to the forearms to be used as solid blades for melee combat. The C-Funnels can also be used defensively, protecting against enemy fire or to provide cover for allies. The C-Funnels can also create a powerful spherical defense system around the suit.

The main armament of Gundam AGE-FX. Its attack power and firing range are far superior to the SigMaxiss Rifle, while having its size drastically reduced. It has two main modes: Normal Mode, where it functions as a regular beam rifle firing pink beam blasts similar to the SigMaxxis Rifle, and Charge Mode, where the side barrel parts are expanded to release a more powerful charged blue blast that can shoot right through obstacles many times larger than itself.[3] Like the AGE-1 Gundam AGE-1 Normal's DODS Rifle, the Stungle Rifle has a limited amount of shots, enough to keep a running battle going for some time, but eventually repeated use without resupply will render the weapon useless.

The AGE System is the special OS for the Gundam, engineered by the lineage of the Asuno family. It researches the evolution of living beings by digitizing the mysteries surrounding it and collects battle data to customize itself, grows alongside the pilot and is customized and used exclusively by the pilot itself. The only way for this system to be used and the Gundam to mobilize is by using the AGE Device.

A new system that allows the AGE-FX to keep up with its X-Rounder pilot and enables him to control the C-Funnels.

AGE-FX's special combat mode, it is a later addition to the suit. This mode disables the suit's limiters, maximizing the AGE-FX's mobility at the cost of lower attack accuracy. It can wipe out large groups of Vagan forces if use well. Upon activating FX Burst Mode, the AGE-FX turns blue and blue-colored beam blades are emitted from ports all round the suit, including the C-Funnels' storage points.

The Core Block System used in this suit is different from the one used in Gundam AGE-3. Instead of using the Core Fighter for docking, this version of the Core Fighter is simply attached to the back to operate the suit and serves as its main propulsion. The Core Fighter usually mounts 2 of the large C-Funnels and can additionally be mounted with 2 more small C-Funnels.

For the history of the AGE-FX, please see Kio Asuno's page.

Appears in the fourth novelization. In addition to the normal armament of the AGE-FX, it is further armed with a Legilis Shield, DODS Lancer, Daidal Bazooka and forearm-mounted SigMaxiss Cannons. 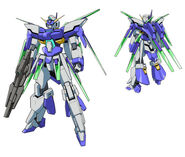 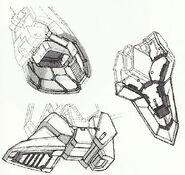 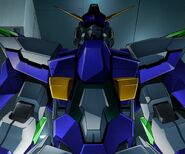 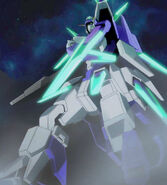 After defending against an attack (Ep 40) 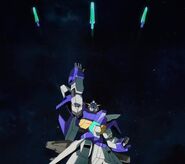 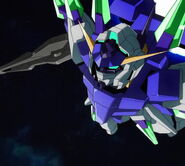 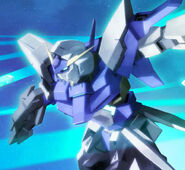 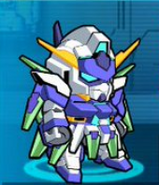 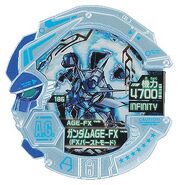 Profile and Lineart with designer's comments