A next generation Gundam that is built based on the combat data of the Gundam AGE-1 based on Flit's past battles with the UE.[1] The unit is designed as a high speed combat unit, able to turn into Strider Mode, where it is able transform into a fighter-like form to fly at high speeds. The unit also posses two forms, which is accessed by separating the limbs of the mobile suit, similar to the AGE-1.

Aside from its speed, the AGE-2 Normal possess a Hyper DODS Rifle and a much sturdier shield along with a beam saber for close combat. The AGE-System installed in the mobile suit allows it to gather combat data to "evolve" the Gundam when needed.

The basic long ranged armament of the AGE-2 Normal developed from the DODS Rifle. It also forms the nose of the AGE-2's Strider Mode.

A basic shield used as a defense armament for the AGE-2 Normal, while in combat it can be used for minor protection.

A sword like weapon that is used for close combat during battle. 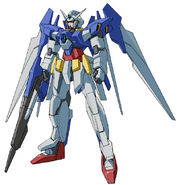 The Gundam AGE-2 and its pilot Asem Asuno(Center), with his father Flit(Right), and Woolf ( Left )

Promotional ad of the 1/100 GB scale version of the AGE-2 Gundam AGE-2 Normal. 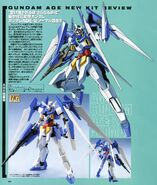 Retrieved from "https://gundam.fandom.com/wiki/AGE-2_Gundam_AGE-2_Normal?oldid=139828"
Community content is available under CC-BY-SA unless otherwise noted.