The AGE-2 Gundam AGE-2 Normal is the successor of the AGE-1 Gundam AGE-1 Normal, appearing in the Asemu Arc of Mobile Suit Gundam AGE. It is piloted by Asemu Asuno.

A next generation Gundam that is built based on the combat data of the AGE-1 Gundam AGE-1 Normal and also incorporates the data of Asemu's battles in Tordia.[1][2][3] It is the second Gundam built using the AGE System and is designed as a high-speed combat unit, able to transform into a Strider mode (also referred to as "G-Strider"), a fighter-like form which flies at three times the speed of its MS mode.[3] In this form, AGE-2 is capable of atmospheric entry.[4] The repulsive force propulsion technology found in the AGE-1S Gundam AGE-1 Spallow is applied to the shoulder-mounted moveable wings.[5]

Like the AGE-1, the AGE-2 also has the Wear System, allowing it to take on other forms. In terms of weapons, the AGE-2 possess a Hyper DODS Rifle, a shield, two beam sabers and two beam vulcans. The AGE-System installed in the mobile suit allows it to gather combat data to "evolve" the Gundam when needed. The AGE-2 Normal was later recolored white in honor of Woolf Enneacle. In AG 151, the AGE-2 Normal suffered heavy damage in combat and had its AGE System Core recovered by the Earth Federation, while Bisidian recovered the rest of its remains and refurbished it into the AGE-2DH Gundam AGE-2 Dark Hound.

The basic ranged armament of the Gundam AGE-2 Normal, it is developed from the DODS Rifle and is twice as powerful.[3] It can penetrate two mobile suits with one shot and forms the nose of the Strider Mode.[2] [3]

A sword like beam weapon that is used for close combat. Like Gundam AGE-1's, Gundam AGE-2's beam sabers are strong enough to pierce and destroy the Vagan's mass-production mobile suits with a single stab. They can also emit a beam dagger from the bottom end. One can be used as a reserve weapon, or both can be used simultaneously in a twin sword fashion.

Mounted in the shoulder, the pair of beam vulcans are usable only in Strider Mode and are used to intercept enemy units or missiles.

Mounted on the left forearm, the Gundam AGE-2 Normal's shield is small in comparison to those used by other mobile suits of the era. Due to its small size, the shield is extremely maneuverable and effective in close combat.

A pistol-like weapon with non-lethal ammo used for target practice.

Like the AGE-1, the AGE-2's arms (including shoulder armor) and legs are detachable, which allows alternate sets of limbs or "wears" to be attached. In conjunction with the AGE Builder, this allows the AGE System to dramatically change the overall performance of the unit by analyzing combat data and fabricating new wear parts to adapt to new situations or enemies. The wear parts can be delivered to AGE-2 during battle using the AMEMBO support craft, saving it from having to return to its mothership/base to exchange the wear parts.

Gundam AGE-2 first sortied in A.G. 141, and successfully defeated the Vagan forces that attacked the Diva. Later, Asemu used it to fight Zeheart's Zeydra during the latter's attack on the Diva, but was soundly defeated, although Zeheart spared him.

Asemu, alongside his unit, participated in the battle of Big Ring, where he faced against both Zeheart and Desil Galette in his Khronos. Asemu teamed up with Woolf in his G-Bouncer to face the Galette siblings, but were overwhelmed, until Flit's arrival in his Gundam AGE-1 Flat turned the tide of the battle.

During the attack in Solon City, Asemu used it again to face and defeat the Vagan forces inside the colony. Shortly afterwards, the AGE-2 was upgraded to the Gundam AGE-2 Double Bullet, enabling Asemu to destroy two X-Rounder piloted machines with ease during the battle outside of the colony.

In A.G 142, the Gundam AGE-2 was painted white in honor of Woolf's memory. Asemu used the unit to face the Vagan forces that attacked Brucia, led by Medel Zant, and easily defeated them.

In A.G 151, Asemu was given a final mission to find a missing ship, taking the Gundam AGE-2 with him. During his search, Asemu encountered Wivik Lambro in his G-Xiphos. Suddenly, they were approached by the giant mobile armor Sid, leaving Asemu with no choice but to team up with Wivik to face it. The two of them managed to defeat Sid at first, but it proceeded to repair itself and heavily damaged the Gundam AGE-2 in their next battle. The Federation was only able to salvage the AGE Device, while Bisidian recovered the remains of the unit. At Asemu's request (who had decided to join the space pirates) the suit was refurbished to hide the fact of his survival, with the result being the Gundam AGE-2 Dark Hound.

The Gundam AGE-2 and its pilot Asemu Asuno (Center), with his father Flit (Right), and Zeheart (Left)

AGE-2's silhouette in the first opening in Episode 12. 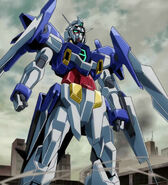 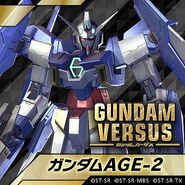 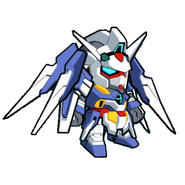 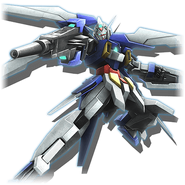 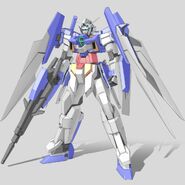 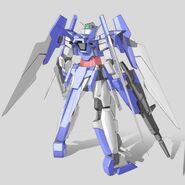 concept art of AGE-2 and AGE-3 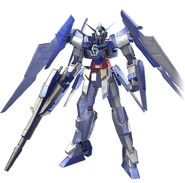