After the AGE-2 Gundam AGE-2 Normal was heavily damaged by Sid, the Earth Federation salvaged both the AGE System Core and the AGE Device, while Bisidian members took the remains of the mobile suit, and its pilot, Asemu Asuno.[1] The said scrap parts were taken to the Madorna Workshop to be repaired, but Asemu decided to hide his identity and became a permanent member of Bisidian. He chose to have the mobile suit reworked to hide the fact that he was still alive and the result was the Gundam AGE-2 Dark Hound.

The Dark Hound shared the same specifications as its predecessor, with the exception of the Wear System and the AGE System. Like its predecessor, it is able to transform into a high-speed fighter-like form known as Strider mode, which flies at three times the speed of its MS mode. Its transformation systems have been restored to perfection, resulting in further improved mobility. In this form, it is capable of atmospheric entry. For weapons, the Dark Hound possess a DODS Lancer, two Anchor Shots and a pair of Beam Sabers.

The primary weapon of the Dark Hound, the DODS Lancer is a modified form of the Hyper DODS Rifle with the barrel retrofitted into a long lance for stabbing. A pair of DODS Guns are built into the sides of the weapon and they fire beam shots rapidly.[1] It forms the nose of the Gundam AGE-2 Dark Hound's Strider Mode.

A sword-like weapon used for close combat during battle. Like the Gundam AGE-2 Normal and its variants, two beam sabers are stored on the rear skirt armor. The Dark Hound can combine two beam sabers into double-bladed beam saber and use it as a boomerang, as seen in the final episode.

A pair of rapid-fire beam guns, which are used to intercept incoming missiles and enemy unit. The beam vulcans are mounted in the shoulders and only usable in Strider Mode.

A wired anchor equipped between each binder of the Dark Hound. It can be launched from the binder to restrain an enemy unit or grab onto a surface. The anchors can also direct electricity to an opponent, shocking them and electrifying their unit.[2] Each Anchor Shot can also be handheld and spun rapidly to form a makeshift shield.

A special equipment built into the chest of the AGE-2 Dark Hound, it emits a blinding flash of light to disorient enemies. It was first used during Dark Hound's battle against the AGE-3 Gundam AGE-3 Normal.[2]

A function that dramatically increases thrust while in Strider Mode, it can be used to leave an area quickly while towing multiple allied units.

For the history of the AGE-2 Dark Hound, please see Asemu Asuno's page. 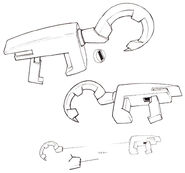 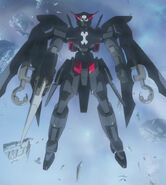 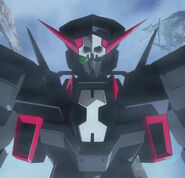 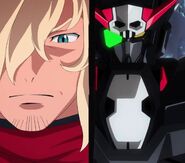 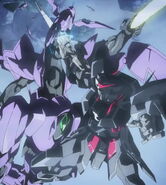 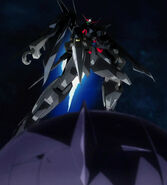 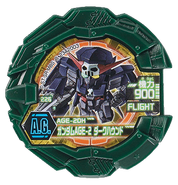 Retrieved from "https://gundam.fandom.com/wiki/AGE-2DH_Gundam_AGE-2_Dark_Hound?oldid=444984"
Community content is available under CC-BY-SA unless otherwise noted.