The AGE-2 Double Blade is a close combat variant of the AGE-2 Normal designed specifically for Earth use, the Strider mode's output as well as balance have been improved to meet the needs of atmospheric flight. Although the Double Blade pack is similar to the Double Bullet pack, numerous improvements have been made to it. The suit is equipped with movable shield binders mounted on both shoulders, and each binder has a hidden thruster as well as a wire-guided pincer known as Wire Scissor. The thrusters can be used to assist in pulling enemy unit captured by the Wire Scissors towards Double Blade. Other armaments includes a pair of Heat Swords stored on the knee armor and Beam Sabers stored in the back skirt.

Mounted on the tip of each binder, the pair of Wire Scissors are pincers that are attached to carbon nanowires.[1] The Wire Scissors have strong destructive power and can be used to restrain or capture enemy targets.[1] Their usage are similar to the Anchor Shots of the later AGE-2DH Gundam AGE-2 Dark Hound.

Two solid blades stored on the suit's knee armors. They can be mounted on the forearms and can generate enough heat to cut through enemy armor.

The Gundam AGE-2 Double Blade retains the pair of Beam Sabers used by the Gundam AGE-2 Normal. Stored on the rear skirt armor, the Beam Saber is a close combat weapon that emits a beam blade during battle and is capable of damaging Vagan's mobile suits such as the Dorado.

The AGE-2 Double Blade was operated by Asemu Asuno, who became the team leader of a special forces unit. It saw combat against a prototype Vagan mobile suit during a test flight near a certain port city on Earth. This also makes it one of the few wear packs that experience combat while still in testing phase. 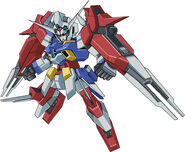