The AGE-2DB Gundam AGE-2 Double Bullet is the second wear configuration of the AGE-2 Gundam AGE-2 Normal appearing in the Mobile Suit Gundam AGE anime series. It is piloted by Asemu Asuno.

The Gundam AGE-2 Double Bullet is a variant of the AGE-2 designed for dealing with multiple opponents simultaneously, including X-Rounders.[1][2] The machine is optimized for Asemu's dual wielding preferences and has new cockpit controls.[2] The AGE-2 Double Bullet retains the standard beam sabers on the rear skirts, and has new weapons in the form of the twin DODS cannons and large beam sabers that are mounted on the shoulders, as well as calf missiles located on the back of the legs, giving the suit a great degree of firepower. It also has drastically enhanced search system.[2]

The Twin DODS Cannons is the primary ranged weapon of Gundam AGE-2 Double Bullet. They are mounted on the red shoulder binders and can rotate in any direction, allowing the suit to shoot down enemy units without moving its arms. When required, they can be dismounted and be wielded like normal DODS Rifles.[2][3]

A pair of beam sabers located on the rear skirt that can be used for close combat during battle.

Four calf missile launchers are mounted at the back of the legs, the missiles fired are used for bombardment or to distract the enemies.

For the history of the AGE-2 Double Bullet, please see Asemu Asuno's page. 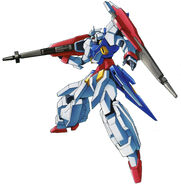 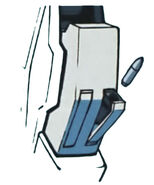 Calf Missile and its launchers 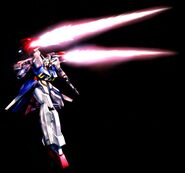 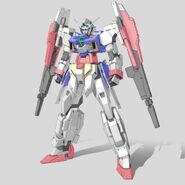 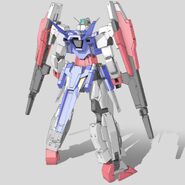