A proposed form developed to defeat the Vagan's "Invisible Umbrella" Stealth System.[1] High performance radar systems are built into both shoulder binders and function by analyzing fluctuations in the movement of cosmic dust, a type of interstellar medium, to indirectly determine the position of an object.[1] Its search capabilities are equivalent to that of a battleship, and is capable of transforming into a "Glider mode" to operate as a high-speed tactical reconnaissance machine for search operations.[1]

Its main armaments are the "Artimes Long-Range Rifles" mounted on the outer shoulder binders and a pair of rapid-fire "Beam Machine Guns" on the smaller inner binders.[1] Gundam AGE-2 Artimes's optional weapons, the "Twin DODS Cannons", can be mounted onto the Beam Machine Guns. These weapons can be rotated individually and are capable of simultaneous multi-directional firing.[1] For close-combat, the Gundam AGE-2 Artimes carries the "Artimes Beam Saber " which can function as a beam gun.[1]

The Gundam AGE-2 Artimes' main armament, the Artimes Long-Range Rifles are a pair of large particle beam rifles mounted on the outer shoulder binders. The rifles can be rotated individually and are capable of simultaneous multi-directional firing. They allow the suit to keep its distant and blast away enemy units.

The Gundam AGE-2 Artimes is armed with a pair of rapid-fire Beam Machine Guns mounted on the inner shoulder binders.

Gundam AGE-2 Artimes' optional weapon for ranged combat, they are the same weapon as used by Gundam AGE-2 Double Bullet. Each DODS Cannon can be mounted onto the Beam Machine Gun.

The Gundam AGE-2 Artimes uses a handheld Artimes Beam Saber for close combat, and it also functions as a beam gun.

A sword-like weapon that is used for close combat during battle. It is the same Beam Saber as used by Gundam AGE-2 Normal, a pair are stored on the rear skirt armor.

The AGE System is the Special OS engineered by the lineage of the Asuno family. It researches the evolution of living beings by digitizing the mysteries surrounding it and collects battle data to customize itself, grows alongside the pilot and is customized and used exclusively by the pilot. The only way for this system to be used and the Gundam to mobilize is by using the AGE Device.

In the Mobile Suit Gundam AGE Universe Accel/Cosmic Drive, instead of using the Double Bullet Pack, Asemu Asuno uses the Artimes Wear Pack in the Battle of Nortrum. 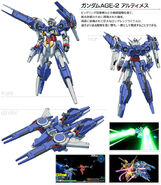 In the game, the Artimes wear is used in the final battle of Asemu's story, as opposed to the Double Bullet.