The AGE-1 Gundam AGE-1 Normal is one of four titular mobile suits featured in the Flit Arc and Asemu Arc of the Mobile Suit Gundam AGE anime series. It was mainly piloted by Flit Asuno and later, temporarily piloted by Asemu Asuno.

Holder of the mobile suit name "Gundam" that belong to a legendary savior, the Gundam AGE-1 Normal is the prized possession of the Asuno Family and is pivotal in the fight against the Vagan. Developed through the data stored in the AGE Device passed down within the Asuno family, the AGE-1 incorporates a special OS, the AGE System which can gather data and come up with equipment to counter a specific enemy. Its basic weaponry includes beam sabers/daggers, a shield and a new weapon called the DODS Rifle that was developed by the AGE System during one of the Gundam's earlier battles against the Vagan. Using "wear parts" created by the AGE System through the AGE Builder, the AGE-1 can take on other forms such as the the faster Spallow form and the heavier Titus form. Unlike other mass-produced mobile suits of the Earth Federation Forces in AG 114, the Gundam's armor is strong enough to withstand attacks from a Gafran.

AGE-1 uses independently developed plasma control technology and has a higher output than Earth Federation Forces’ Genoace.[1] The core component of the AGE System is located in the MS’s chest.[1][2] The "spoiler-like" device on the suit's back is actually a broad antenna, and by linking it with various sensors in the head unit, the AGE System is able to collect and analyze data during combat. A limited amount of data can also be transmitted.[1] Due to the suit's experimental nature, its limbs are equipped with independent power units to mitigate maintenance and logistic issues related to working with the parts. The AGE System later used this special characteristic as the basis for the Wear System.[1]

During the early parts of the project, a large amount of AGE-1 parts were manufactured by the AGE Builder based on a proposal by the AGE System.[3] Having doubts about the result of the AGE System, the Federation military took control of the spare parts for their own plan.[3] The idea was that after the original AGE-1 unit was made, it would only serve as a test unit. The data gathered from the original unit's tests would then be used to create a second "perfect" AGE-1 unit from the excess spare parts.[3] When the original unit was finally tested however, its performance and test results were impressive and as a result, was considered to be the "perfect" unit.[3] The leftover spare parts were then sent to the military's R&D department and used for research.[3]

A second unit with the model number "AGE-1F/2" and dubbed "Unit 2" was eventually some time after the battle at Ambat from the AGE-1 spare parts.[3] This unit was created for the sole purpose of testing out the "Jacket System" equipment and was piloted by Largan Drace.[3] The sudden proposal to build a second AGE-1 unit came around the same time when a formal review was made regarding a mass-production version of the AGE-1, but the project was encountering difficulties due to slow progress the Federation was making on analyzing the AGE System.[1] The plan, later known as the "New AGE project", received a major boost when Flit Asuno joined the R&D department and was then expanded to the construction of Unit 2.[1] Officially, the military attributed the advancement to the magic of the Asuno family but in reality, it was a result of the participation of numerous well known mobile suit workshops including the Madorna Workshop under Flit's name.[1]

By AG 140, the AGE-1's overall performance was upgraded to a higher level to keep up with the other Earth Federation Forces mobile suits. Its combat data proved invaluable to the Earth Federation Forces, as they were able to create newer weaponry for their mobile suits and a mass-production version of the Gundam. The following year, AGE-1 was sent to the Big Ring for more upgrades so it can be used without the AGE System.[4] The resulting form of this was known as the AGE-1F Gundam AGE-1 Flat.

Stored in the AGE-1's side skirt armor are a pair of beam sabers. The beam sabers can adjust their length for different combat situations and are also strong enough to pierce and destroy the Vagan's mass-production mobile suits such as Gafran, Baqto, etc.[7] One can be used as a reserve weapon, or both can be used simultaneously in a twin sword fashion.

The AGE-1's defensive armament. It's made much thicker and sturdier than the Genoace's shield.

A weapon originally used by the RGE-B790 Genoace. Despite being a beam weapon, the beam spray gun is not powerful enough to damage the armor of Vagan mobile suits. The shots of the Beam Spray Gun are about as powerful as a tank shell.

A pistol-like weapon with non-lethal ammo used during the mock battle in episode 4.

An optional weapon only available in the PSP game, the Beam Rolling Lance is a pole weapon with a rolling beam cutter on its tip. With it, the AGE-1 can slice down Vagan suits far better than regular beam sabers.

The AGE System is the Special OS for the Gundam AGE-1 engineered by the lineage of the Asuno family. It researches the evolution of living beings by digitizing the mysteries surrounding it and collects battle data to customize itself, grows alongside the pilot and is customized and used exclusively by the pilot itself. The only way for this system to be used and the Gundam to mobilize is by using the AGE Device. After the rollout of its successor, AGE-2, AGE-1 was taken to the Earth Federation's headquarters, Big Ring so that it can be modified to not require the AGE System anymore.[4]

The arms (including shoulder armor) and legs of the AGE-1 are detachable, which allows alternate sets of limbs or "wears" to be attached. In conjunction with the AGE Builder, this allows the AGE System to dramatically change the overall performance of the unit by analyzing combat data and fabricating new wear parts to adapt to new situations or enemies. Later, the AMEMBO support craft was built to deliver the wear parts to AGE-1 during battle, saving it from having to return to its mothership/base for the exchange of wear parts.

For the history of the AGE-1 Normal, please go to Flit Asuno and Asemu Asuno's page. 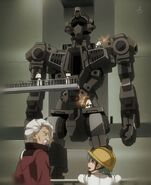 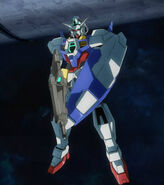 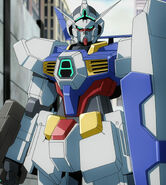 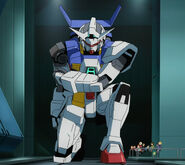 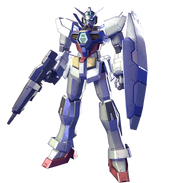 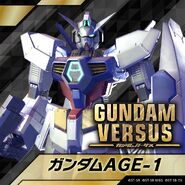 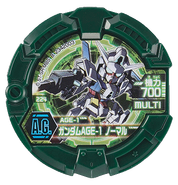 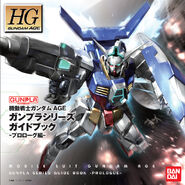 Retrieved from "https://gundam.fandom.com/wiki/AGE-1_Gundam_AGE-1_Normal?oldid=495639"
Community content is available under CC-BY-SA unless otherwise noted.