The AGE-1T Gundam AGE-1 Titus (aka Titus) is a close combat variant of the AGE-1 Gundam AGE-1 Normal from the Mobile Suit Gundam AGE series. It is piloted by Flit Asuno.

A new form of the Gundam AGE-1 developed by the AGE System. Reminiscent of a wrestler, the Titus specializes in melee combat and can use its powerful strength with the beam emitters across its body to perform devastating physical attacks.[1] The Titus was developed to counter the ovv-a Baqto [2] as the AGE System's answer was to demonstrate overwhelming combat power that combines offense and defense.[3] The Titus is also quite effective against the ovv-f Gafran, however its speed is quite low, leaving it severely disadvantaged against the high-speed xvv-xc Zedas.[4] By releasing the system's limiter, the AGE-1 Titus can enter a "maximum output" mode.[5]

A disc-shaped beam generated from a beam emitter hidden in each forearms that is revealed when the red and white parts separate.[1] It is in used in a wrestling-style lariat attack where the Titus rams the enemy with its outstretched arm.[6]

A set of three short beam spikes can be emitted from the holes on each knee armor[1], enhancing the power of the Titus's kneeing attacks.

A hand-carried beam weapon originally used by the AGE-1 Gundam AGE-1 Normal, the DODS Rifle could pierce through a mobile suit's armor by spinning the beam like a powerful drill. Two such rifles are wielded by a member of the Mass-Divers in Gundam Build Divers.

For the history of the AGE-1 Titus, go to 'Flit Asuno's page

Arm of the Titus 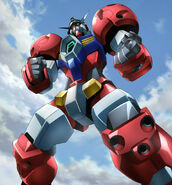 Destroying a Baqto with Beam Lariat 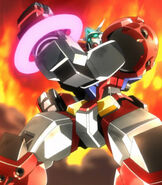 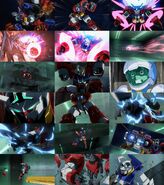 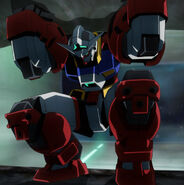 AGE-2 Titus
Add a photo to this gallery 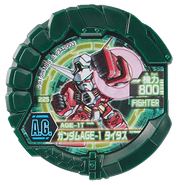 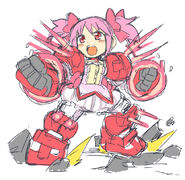 Retrieved from "https://gundam.fandom.com/wiki/AGE-1T_Gundam_AGE-1_Titus?oldid=495637"
Community content is available under CC-BY-SA unless otherwise noted.