The AGE-1S Gundam AGE-1 Spallow is a variant of the AGE-1 Gundam AGE-1 Normal from the anime series Mobile Suit Gundam AGE and is piloted by Flit Asuno.

A high speed variant of the AGE-1 Gundam AGE-1 Normal,[1][2][3] at 33.4 tons, it is almost 25% lighter than the AGE-1 Normal. The Spallow was developed to counter the UE's high mobility mobile suit, xvv-xc Zedas. The introduction of lighter parts and more attitude control verniers allows the Spallow to achieve speed and maneuverability unprecedented in the history of MS.[4] Its mobility actually exceeds that of the Zedas,[5] and its "Shiguru Blade" has even greater cutting power than the Zedas sword, cutting through the sword with barely any effort. To reduce the chances of being detected, it was not given any beam weapons.[5]

A short sword that functions as Spallow's main weapon, it can cut through the armor and sword of the Zedas. The Spallow can increase the blade's cutting strength by using it in conjunction with built-in forearm thrusters. The Shiguru Blade uses single-molecule high-speed vibration to offset resistance when cutting physical objects. It is usually aimed at the joints of enemy MS.[6] Despite its appearance, the blade is actually really heavy and requires the whole body to swing in order to make the blade swing as well.[5] The blade also requires time to solidify itself after cuts and is not designed to be used for long periods.[5] The Shiguru Blade is stored on the rear waist armor when not in use.

For the history of the AGE-1 Spallow, go to Flit Asuno's page 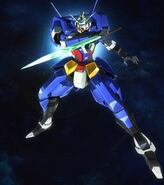 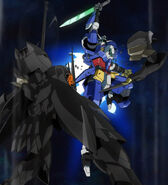 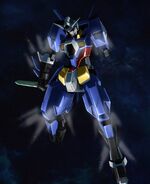