Gundam AGE-1 Swordia is a close-combat variant of the AGE-1 Normal with the appearance reminiscent of a medieval knight.[1] The wear pack itself is specially tuned to be used under gravity, with the armor made stronger to balance itself while holding its huge weaponry. It is equipped with two beam sabers/daggers, a newly built double-edged Liberta Sword and a shield.

A double-edged sword which serves as Gundam AGE-1 Swordia's primary armament. Developed based on Shiguru Blade technology, it has twice the cutting power and can cut through beam saber blades. It is stored in the shield when not in use.

A physical shield which serves as Gundam AGE-1 Swordia's primary defensive armament. It is shorter than the AGE-1 Normal's shield but seems to be wider.

Another close combat armament of the Gundam AGE-1 Swordia. The beam saber can adjust its length for different combat situations and can pierce and destroy the Vagan's mass-production mobile suits. 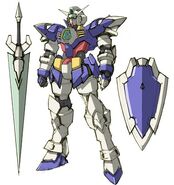 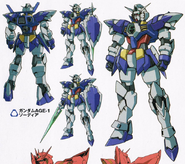