The AGE-1R Gundam AGE-1 Razor is a variant of the AGE-1 Gundam AGE-1 Normal from Mobile Suit Gundam AGE -UNKNOWN SOLDIERS-. It is piloted by Flit Asuno.

The Razor wear equipped on the Gundam AGE-1 Razor is developed based on the Gundam AGE-1 Spallow, and is created by the AGE System to overcome the low wear resistance of the AGE-1 Spallow's Shiguru Blade. The AGE System resolved the issue by equipping the AGE-1 Razor with multiple blades that have a multilayered structure. This ensures that the suit has spare blades even if one wears out, while the multilayered structure enables the exposure of a new cutting edge when the one above wears out. These blades are known as "Razor Blades" and are equipped on the arms and legs, one on each limb.[1]

The AGE-1 Razor is a good example of one of the weaknesses of the AGE System, namely that it does not consider the pilot's skill when developing equipment. Unlike the AGE-1 Spallow that uses its lightweight and additional thrusters to increase the cutting ability of its weapon, the AGE-1 Razor is designed to take advantage of the Razor Blades' large mass and requires that the pilot uses the inertia created when swinging these heavy blades to enhance their cutting abilities. Even flying in a straight line is difficult due to these heavy blades, and as a result, the suit can only be controlled by a pilot who has X-Rounder-level abilities.[1]

The AGE System did not design the AGE-1 Razor with additional thrusters like the AGE-1 Spallow as its calculations showed that this is not the best method to push the Gundam's performance to the physical limit. Instead, its calculations show that mastering the use of inertia is far more effective. When used effectively, the AGE-1 Razor's power is superior to AGE-1 Spallow, and this is shown when Flit Asuno manages to master the suit's control. He deployed all four razor blades in different directions and spins the suit rapidly like a top, this resulted in the destruction of the enemy forces that troubled the AGE-1 Spallow within a short time.[1]

A razor blade is mounted on each forearm and can be used in this form directly. The arm-mounted blades can also be detached and used as handheld swords or combine and form a boomerang-like weapon that unfortunately do not return when thrown. The razor blade's blade is made using the same technology as the AGE-1 Spallow's Shiguru Blade, and can be thought of as an enlarged version of the latter. However, unlike the Shiguru Blade, the razor blade has a multilayered structure that can reveal a new cutting edge when the one above wears out to improve wear resistance. Due to their heavy weight, they can only be used effectively by pilots with X-Rounder-level abilities.

A razor blade is also mounted on each leg of the AGE-1 Razor. The pair of leg-mounted razor blades also have multilayered structure for improved wear resistance, but they cannot be detached, instead they are connected to the legs via movable joints and can extend outwards to increase their reach. These blades serve to increase the attacking capabilities of the suit's legs, and can be used in conjunction with the arm-mounted/handheld razor blades for a variety of attacks. 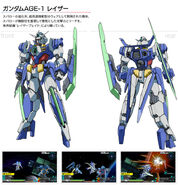 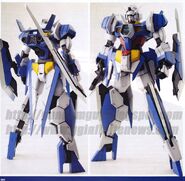