The Agrissa is a series of assault hover carrier type Mobile Armor (MA), with assorted variants to suit different needs.[1][2] When required, a Mobile Suit (MS) can dock with the MA, and serves as its control unit.[1][2] Created and deployed by the AEU during the Solar Power Wars, it is developed primarily for transport and resupply purposes.[1][2][3] The MA can transport up to two transformable MS, one hover tank, or numerous automatons.[1][2][3]

The protrusions on the sides of the top surface, are power-receiving antennae and they allow the Agrissa’s battery to be recharged via microwave beam from the power-generating satellites or the Orbital Elevator.[1][4] Besides hovering, the MA can also be outfitted with the multi leg unit as a means of movement, allowing it to function as a mobile frontline base for mechanized infantry unit, as well as a base suppression MA.[1][3] There are also Agrissa units without such leg units.[3]

Amongst the Agrissa’s variations, the Type 7 is specifically for defending the Orbital Elevator.[1][2][3][4] In additional to high individual combat performance, the Agrissa Type 7’s most defining characteristic is its ability to immobilize an enemy unit by trapping it in a Plasma Field in an area enclosed by the MA’s legs, and then attack with its Plasma Cannon.[1][2][4] The plasma field is designed to harm the enemy pilot and not the machine.[1][4] This helps to prevent the Orbital Elevator from being damaged by the flying debris from exploding enemy unit.[1] The Agrissa Type 7 also has a pair of Carbon Claws for close combat.[1][2][3]

In AD 2302, an Agrissa Type 7 was deployed with a modified AEU-05/00 AEU Hellion Medium docked to the top as a control unit.[3][4] The Hellion Medium has shorten wings and is armed with a large Linear Cannon powered by the MA’s battery.[2][3] The MS can separate from the MA when necessary, such as when the MA is critically damaged, and operate independently.[3][4][5] Nano machines on the MA’s surface are responsible for its unique striped camouflage pattern and colors.[3] These pattern and colors can be altered through the nano machine’s program.[3] The Agrissa Type 7 serves as the predecessor of the Agrissa Type 13.[6]

Mounted below the nose of the Agrissa Type 7, this weapon is revealed only when attacking.[2][3][5] The rotatable plasma cannon can be used in conjunction with the plasma field, allowing the destruction of the trapped enemy machine, something that the plasma field by itself cannot do.[1][3]

A pair of curve claws are mounted on the Agrissa Type 7’s multi leg unit, above and between the two legs on each side.[2][3] These carbon claws can easily immobilize HRL’s heavily armored MS in close combat.[1]

A large weapon that fires electromagnetically accelerated physical projectile.[3] It is flexibly mounted on the top surface of the Agrissa Type 7, and held in hand by the docked Hellion Medium when used.[2][3] The usage of this weapon is possible due to the huge electrical power reserve in the MA’s battery.[2][3]

A set of removable leg unit for the Agrissa Type 7, it is attached to the sides and consisted of four legs for walking and two carbon claws for close combat.[1][2][3] Tips of the four legs generate linear fields, creating repulsive force against the ground, and allow the MA to support itself using the least contact surface with the ground.[1] The four legs also contain plasma field generators on their inner surface.[2][3][4] When the MA is hovering, the multi leg unit is folded along the sides.[2][3][5]

AD 2302. To capture the GN-XXX Gundam Rasiel, Fon Spaak and his group of mercenaries laid a trap in the desert and borrowed several weapons from the AEU, including the "Agrissa Type 7". The Gundam appeared and easily shot down several of the group's Hellions. The remaining Hellions retreated, leaving the Agrissa Type 7 alone. Fon left the cockpit of the Hellion Medium docked to the Agrissa Type 7 with both hands raised as a sign of surrender. As the Gundam closed in, Fon used the remote control in his hand to make the Agrissa Type 7 jumped towards the Gundam and trapped it between the mobile armors' legs. Fon had known from the beginning that the Hellions were no match for the Gundam, and that tricking the opponent into letting his guard down was the only way to win. The Agrissa Type 7 deployed its plasma field, but the Gundam's pilot managed to pulled the trigger despite the intense pain. The mobile armor was destroyed by a beam shot from the Gundam’s GN Beam Rfile, but Fon managed to escape by jumping down from the machine.

AD 2312. The Agrissa Type 7 was one of the outdated mobile weapons used by the military resistance organization, Katharon, in their battle against the Earth Sphere Federation and in particular, the autonomous peace-keeping force known as A-Laws.

Front and Rear View (Agrissa Only) 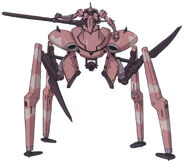