The Agrissa is a large multi-legged mobile armor developed and used by the AEU during the 5th Solar Power War.[2][3][4][5] This mobile armor is an example of a 'Buddy Craft', a type of support-use carrier vehicle that primarily docks with the lower half of a mobile suit, granting it highly specialized capabilities at a mobile armor level.[6] While the AEU has an edge in this technology over the other factions, it was deemed that further development of the buddy craft would not confer the bloc much prestige.[6]

The Agrissa can surround an enemy machine with its six legs and deploy a powerful plasma field that causes great harm to the enemy pilot, allowing the capture of the enemy machine.[3][4][5][7] It also has another powerful weapon in the form of a plasma cannon, and a special coating is applied to the mobile armor's surface for resisting its own plasma weaponry.[3][4][5][8] Two spike-like power receiver antennas are located on the mobile armor's top surface, they allow it to be supplied with power from the solar power generation system via microwaves, thereby supporting the Agrissa's huge energy expenditure.[5] When flying, the mobile armor's legs are folded on the sides.[7][8][9][10]

A weapon designed for harming the enemy pilot, allowing capture of the enemy machine.[4][5][7][12] During combat, the Agrissa surrounds the enemy machine with its legs and the six circular plasma field generators, one located on the inner surface of each leg, are activated to create a field of plasma.[5][7][9][12] The plasma field is accompanied by an intense electrical discharge, which presumably like those of the earlier AEU-MA0707 Agrissa Type 7, is also involved in harming the pilot.[7][11]

Mounted below the front portion of the Agrissa and concealed by two movable flaps when not in use, the plasma cannon's attack power is beyond what a mobile suit-sized machine is capable of.[5][9][10] It is for attacking the enemy machine surrounded by the Agrissa’s legs, and presumably like the Agrissa Type 7's, can be used to destroy the machine.[9]

The main weapon of the docked Enact Custom Agrissa Type, it is a linear rifle with a large carbon blade that slides out of the barrel when needed.[7][13] The blade rifle can be swung like a sword by using one of the two side grips at the rifle's rear section.[13] Its barrel can also adopt a scissor-like form by opening to the left and right.[13]

A close combat weapon used by the docked Enact Custom Agrissa Type, it is mounted externally on the inner side of the left elbow joint.[7][13] It is a larger version of the sonic blade, a dagger-like weapon with a blade made of super-hard carbon that can vibrate at a high frequency.[13] An elongated blade made of plasma can also be generated around the blade, allowing the weapon to be used as a plasma sword.[13]

Located on the sides of the Agrissa's legs, they release substances that induce magnetization to immobilize the enemy machine.[5][10]

Daiki Miyaga utilized a green 1/144 scale gunpla of the Agrissa in his second gunpla battle with Seiho Academy's Gunpla Battle Club. The model was docked to Miyaga's customized Enact Commander Type. The Agrissa put Fumina Hoshino's Powered GM Cardigan and Sekai Kamiki's Build Burning Gundam on the back foot, but was defeated by the soon-to-be Team Try Fighters when Yuuma Kousaka turned on him for utilizing a mobile armor in violation of the battle rules. 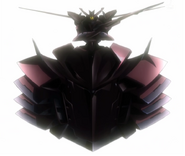 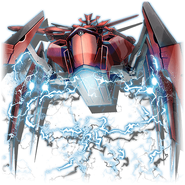