Pilot only, in standard cockpit in torso

AEU-09 AEU Enact (aka Enact), is AEU's most advanced MS in season 1 of Mobile Suit Gundam 00. The unit was piloted by Patrick Colasour.

The latest MS developed by the AEU. A solar energy model, this MS can accept a direct supply of power from the orbital elevator's generation system. The basic design is noted by Union scientist Billy Katagiri to be heavily based on the Union's Flag and shares many features such as the flight form transformation and armaments. The Enact is a high performance mobile suit that is capable of transforming into a high speed jet fighter mode. Both modes are capable of aerial flight with the mobile suit mode providing greater mobility and the jet fighter mode providing greater speed. The Enact's linear rifle can be used in both modes. However the sonic blade used for close combat and the defense rod are limited to use only in mobile suit mode.

A rifle that fires electromagnetically-accelerated live rounds and was one of the most advanced weapons available before the introduction of beam weaponry.

The standard melee weapon of the Union's mobile suits. A sonic blade is a folding dagger-like weapon that incorporates a high-frequency oscillating blade. The vibrations of the oscillating blade greatly increase the weapon's cutting capabilities. Similar to SVMS-01 Union Flag's sonic blade, Enact's sonic blade is also capable to generate plasma sword. The weapon has been known to cause pain to the ears of nearby people not protected by a machine.

A standard defensive feature of AEU and Union mobile suits. The defense rod is a rotating rod usually connected to the elbow joint of the mobile suits left arm. The rod is capable of deflecting certain physical rounds such as bullets from a machine gun and in some cases a shot from a beam rifle by generating plasma field. However the defense rod is limited as a shield and the Enact must rely on its speed and maneuverability when defending against heavier firepower.

The Enact's production was launched in the year 2307 and the model was first introduced on the day of the HRL's ten year celebration for the completion of its Orbital Elevator. The AEU, whose orbital elevator is still in an incomplete state, has staked its organization's prestige on the development of this new solar energy-adapted mobile suit. The demonstration unit operated by AEU ace pilot, Patrick Colasour, was announced on the same day the Human Reform League celebrated the tenth anniversary of the completion of its own orbital elevator, only to be heavily damaged by Gundam Exia during its demonstration.

Although its abilities were virtually identical to the Union's Flag, the Enact's design incorporated the the latest in mobile suit technology making it one of the most advanced mobile suit to date. However its capabilities were quickly overshadowed by the Gundam Exia piloted by Setsuna who defeated an Enact piloted by one of the AEU's top Aces with ease, completely destroying the unit's head and arms without damaging the cockpit. This humiliating defeat would delay the Enact's launch, but that did not stop the PMC Trust from making use of the mobile suit. Enacts operated by both AEU military and PMC Trust would later take part in battles against Celestial Being's armed intervention with little success.

Some months after the introduction of the Enact the Union, AEU, and HRL would unite together and create the United Nations Forces that would use the GNX-603T GN-X. This was the precurser to the establishment of the Earth Sphere Federation which would mass produce the GN Drive Tau technology and production of previous mobile suit models such as the Enact would cease in favor for mobile suits of the GNX series.

By the year 2312 most Enacts still in service for the Earth Sphere Federation despite being outmatched by GN-X model mobile suits. The Enact and its variants were also used by various independent factions and anti-federation organizations such as the Kingdom of Suillie and Katharon. 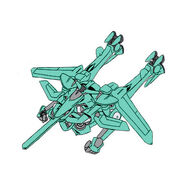 Retrieved from "https://gundam.fandom.com/wiki/AEU-09_AEU_Enact?oldid=70428"
Community content is available under CC-BY-SA unless otherwise noted.