The Enact Custom is a modified form of the development test machine of the AEU-09 AEU Enact (aka Enact) obtained by the Republic of Moralia's PMC Trust, which has a cooperative relationship with the AEU.[1][2][3] It is tuned up and customized by PMC Trust to suit its assigned pilot, Ali al-Saachez, in hopes that he could capture one of the Celestial Being's Gundams.[1][2][3][4] Together with Ali al-Saachez's excellent piloting skills, the Enact Custom proved to be more than a match for the GN-001 Gundam Exia.[2][5][6][7] The 'Y' in its model number signifies that it is a prototype, while the numbers '812' identify it as the 2nd unit of the 81st model.[2][7]

The Enact Custom has larger power receiver antennas on its shoulders and head than the standard Enact, significantly boosting the amount of power it can receive from the solar power generation system.[2][3][7][8] This is in anticipation for the future equipping of beam weaponry.[2][3][7] Additionally, as requested by Ali al-Saachez, the mobile suit's weight is lowered via armor reduction and this also leads to improved mobility.[2][3][7][8] The Enact Custom has the same transformation system as the standard Enact, allowing it to switch modes during operation.[5][7] However, the mobile suit's lighter weight seems to have enhanced the Flight mode's turning performance, cruising speed, etc.[9]

For its armaments, the Enact Custom has enhanced weaponry such as the blade rifle and the large sonic blade (plasma sword).[2][9][10] The weapons it can store internally are also changed to those of a close combat nature.[2][4] The legs' weapon bays, which typically store long-range weaponry such as missiles on the standard Enact, are used for storing gatling guns, long blades, flamethrowers, napalm bombs, etc.[2] Since the Enact Custom's large sonic blade (plasma sword) is mounted externally, the forearms' weapon bays, where the standard Enact stores its sonic blade (plasma sword), are instead used for storing carbon daggers and the like, throwing weapon/equipment such as grenades, smoke bombs, adhesive rounds or other mission appropriate equipment such as wire anchors.[2]

Initially, the Enact Custom had a blue color scheme to differentiate the experimental machine from the mobile suits of Moralia's regular military.[2][3] Later, when Ali al-Saachez served as a member of AEU's French Foreign Legion, the machine was given a special, red-colored, plasma field-resistant coating so that it could utilize the mobile armor AEU-MA07013 Agrissa Type 13.[7][11][12][13] This new color scheme also hides the fact that the mobile suit is diverted from the PMC Trust.[11][12] This configuration is known as the 'Enact Custom Agrissa Type' and has an additional '/A' attached to its model number, its performance and weaponry are the same as the Enact Custom's.[10][11][12]

A small-caliber projectile weapon mounted on the left side of the pelvis' circular parts, it is usable in both MS and Flight modes of the Enact Custom/Enact Custom Agrissa Type.[2][11] Although lacking in firepower, it can be rapid-fired and has high utility value.[2][11] It is used for intercepting missiles, anti-vehicles, anti-personal and other cases where heavy firepower is unnecessary.[2][11] In mobile suit combat, it is mostly for restricting enemy movements.[2][11]

The Enact Custom/Enact Custom Agrissa Type's main weapon, it is a linear rifle with a large carbon blade that slides out of the barrel when needed.[1][2][4][11] The blade rifle can be swung like a sword by using one of the two side grips at the rifle's rear section.[2][5][7][11] Its barrel can also adopt a scissor-like form by opening to the left and right.[2][11] Overall, the blade rifle allows the mobile suit to switch between ranged and close combat without changing weapons.[6][9][14] Various optional armaments such as a missile launcher can be fitted on the barrel.[2][7][9][15]

An optional weapon that can be fitted around the blade rifle's barrel or held by its own grip.[2][7][9][15] It fires 4 missiles that open up to launch 14 smaller missiles each.[2][7][9][15] Although incapable of complex homing and controls, they are suitable for causing destruction in a wide area.[2] Used by the Enact Custom to destroy Kingdom of Azadistan's solar power receiver antennas.[2][15]

A sonic blade has a blade made of super-hard carbon that can vibrate at a high frequency and has high cutting capabilities.[2][11] Additionally, by focusing plasma into an elongated blade shape around the physical blade, it can also be utilized as a plasma sword.[2][11] As the Enact Custom/Enact Custom Agrissa Type uses a larger version of the sonic blade, the weapon is mounted on the inner side of the left elbow joint instead of being stored in the forearm like the normal Enact.[2][11]

Various luminescence patterns can be generated on both sides of the Enact Custom/Enact Custom Agrissa Type's face via the facial sensor elements, although they are most often seen on the left side.[1][6][16][17] The patterns can be used for optical communications and presumably, for intimidation as well.[17] It is unclear how the patterns are controlled. 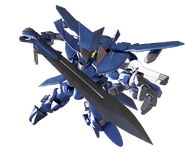