In AD 2308, the three blocs united against the Celestial Being, creating the United Nations Forces equipped with the new GNX-603T GN-Xs powered by GN Drive Taus. After the defeat of the Celestial Being, the Earth Sphere Federation was formed and GN Drive Tau-powered mobile suits were mass produced, causing production of older mobile suits such as the Enact series to eventually cease. However, the Enact series and other older mobile suits continued to be deployed by the Earth Sphere Federation Army, and were also operated by other factions such as the Kingdom of Suille and the anti-federation organization, Katharon. 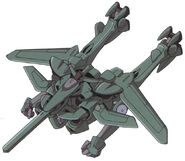 Retrieved from "https://gundam.fandom.com/wiki/AEU-09T_AEU_Enact_Commander_Type?oldid=445286"
Community content is available under CC-BY-SA unless otherwise noted.