Klaus's Enact Landstriker Package is a combination of a customized AEU-09 AEU Enact (aka Enact) used by Klaus Grad of Katharon's Middle East's third branch with a desert-use hover carrier known as "Sand Chariot".[1][2][3] The Sand Chariot is an example of a 'Buddy Craft', a collectively term for support-use carrier vehicles designed for mobile suits that has existed since the Solar Power Wars.[1][4] Another well-known Buddy Craft is the AEU-MA07013 Agrissa Type 13, and the AEU has the technological edge over the Union in this field.[1][4]

Buddy Craft mainly combines with a mobile suit's lower body, granting it highly specialized, mobile armor-like capabilities.[4] In this case, the Sand Chariot grants high mobility in desert environment.[5] While specialized for the desert, its powerful hovering capabilities also allow it to move over water surfaces after some settings adjustment.[1] As for the customized Enact itself, notable changes include a different head design, the wings of the back-mounted flight units have their length reduced in half and can now double as weapon pylons, the wings of the waist-mounted sub flight units are removed and a double-barreled smoke discharger is added to the left shoulder armor.[1][5][6]

Klaus's Enact Landstriker Package is considered a relatively new machine amongst the Katharon's older generation of mobile suit.[1] Its armament consisted of a 20mm machine gun, a sonic blade (plasma sword), a defense rod, a linear machine gun and a laser cannon.[1][5][6] The laser cannon was fitted on the machine after Klaus joined Katharon, and is meant as a counter against GN Drive Tau-powered mobile suits.[1] As the situation changes following the rise of A-Laws as well as his promotion to branch leader, Klaus has fewer opportunities to pilot the machine.[1][2]

Located on Klaus's customized Enact, it is installed on the left side of the pelvis' circular parts. This small-caliber projectile weapon lacks firepower, but can be rapid-fired and has high utility value. Operable after undocking from the Sand Chariot, it is used for intercepting missiles, anti-vehicles, anti-personal and other cases where heavy firepower is unnecessary. In mobile suit combat, it is mostly for restricting enemy movements.

A firearm that functions in a similar manner as the linear rifle, but with better rapid fire capabilities.[6] While powerless against GN Drive Tau equipped units, its physical projectiles can still damage their sensors, causing some trouble.[1][6] The linear machine gun remains effective against older generation mobile suits, which are still numerous, and can handle a variety of missions.[1][6]

The main melee weapon of Klaus's customized Enact/Enact Landstriker Package, it has a short blade made of super-hard carbon that slides out of the handle during use. The blade can vibrate at a high frequency and has high cutting capabilities. Additionally, by focusing plasma into an elongated blade shape around the physical blade, the weapon can also be utilized as a plasma sword. It is stored in the forearm when not in use.

A modified, half-barrel version of the laser cannon used by warships, it can be powered by the hover carrier's large battery.[1][6] The laser cannon is for countering GN Drive-Tau equipped units and fitted on Klaus's Enact Landstriker Package after Klaus joined Katharon.[1] AEU's standard Enact Landstriker Package is armed with a long barreled linear cannon that is also utilized by the AEU-MA0707 Agrissa Type 7, etc.[1] The laser cannon can be used in combination with the linear machine gun.[1] While the linear machine gun restricts the enemy's movement, the laser cannon is fired to deal the real damage.[1]

Mounted on the forearm, the defense rod is a defensive device that uses rotary motions to deflect/ricochet incoming enemy projectiles, and can generate a plasma field upon contact with the projectile to reduce the impact, etc. The defense rod may break if hit by an attack on its front side.

Like the AEU-MA07013 Agrissa Type 13, the Sand Chariot is a 'Buddy Craft' – a type of support-use carrier vehicle that primarily docks with a mobile suit's lower half, granting it highly specialized capabilities at a mobile armor level.[1][4] Providing high mobility in the desert via hovering, the Sand Chariot of Klaus's Enact Landstriker Package is a new version made for an Enact and is more powerful than the old version used by the AEU Hellion.[1][2][5] A cockpit in the cowl section allows the Sand Chariot to function as an independent mobile armor.[1] Its center section has electromagnetic propulsion unit and a large battery, while the circular columnar parts on the left and right are motors and their flat ends serve as hardpoints.[1] The hover sections' cushions inflate during operation, and after some setting adjustments, the Sand Chariot can move over water surfaces.[1] When utilized for naval combat, with no intention of landing operations or combat on land, the 'Landstriker Package' is renamed 'Ocean Package'.[1]

Klaus's customized Enact can generate luminescence patterns on the left side of its face.[1] Presumably, like the standard Enact, this ability is also present on the right side of the face and these patterns are for intimidation and optical communications.

A double-barreled smoke discharger is fitted on the left shoulder armor.[1][5][6]

The two mobile suits then engaged in a fierce battle. While Amy's Advanced GN-X raced across the sky, making it difficult for the enemy to land a hit on it, the Enact Landstriker Package hovered across the ground, using its linear machine gun to restrict the Advanced GN-X's movement while trying to get a hit with its laser cannon. Suddenly, a loud explosion came from behind Amy; the base he was guarding had blown up. The enemy had lured Amy away so that fellow members of Katharon can destroy the defenseless base. Later, Amy learnt that the enemy he was fighting against was Klaus Grad from Katharon's Middle East's third branch. Amy then viewed Klaus as his fated rival and swore revenge. However, the two did not meet again. 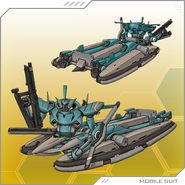 Details of the "Sand Chariot" hover carrier and the laser cannon

Retrieved from "https://gundam.fandom.com/wiki/AEU-09/LS_Klaus%27s_AEU_Enact_Landstriker_Package?oldid=449484"
Community content is available under CC-BY-SA unless otherwise noted.