The AEU-05/05 AEU Hellion Perpetuum (aka AEU Hellion, Hellion '05 Type) is a mobile suit that appears in both seasons of Mobile Suit Gundam 00.

The AEU Hellion Perpetuum is lighter than both its predecessors, but retained mostly the same parts composition as well as the limited transformation capabilities, whereby it can be deployed in the humanoid MS mode or the fighter jet-like Flight mode after undergoing parts swapping in specialized bases.[3][4][8][9] Although the transformation system did not allow the mobile suit to switch modes during combat, it is highly reliable due to its simple structure.[10][11] The Flight mode's aerial combat performance is considered to be quite excellent and even caused some troubles for the Celestial Being's more advanced GN-001 Gundam Exia.[10][12] As there is no noticeable disadvantage to having a Flight mode, this feature is inherited by the AEU Hellion Perpetuum's successor, the AEU-09 AEU Enact.[10]

The AEU Hellion Perpetuum's limited transformation capabilities are similar to the VMS-15 Union Realdo and this is not surprising as the AEU Hellion Initium was developed using the former as a reference.[3][10][11][13] Other similarities between the Union Realdo and the AEU Hellion Perpetuum include armaments, which consisted mainly of Linear Rifle, Sonic Blade, Defense Rod, etc, and both mobile suits' face parts being composed of optical cameras and sensor elements.[3][4][10] Despite their similar characteristics, it is dangerous to deal with both machines in the same manner during combat, as they differ in their performances and basic battle tactics.[13]

Even though the AEU Hellion Perpetuum is in the process of being replaced by the newer AEU Enact, it is still deployed as the primary mobile suit in many locations.[2][3][8][10] There are many variations of the machine that differ in head design and weaponry, including a commander type with improved communication capabilities and an added forward-tilting horn on its head, space type, ground type, bomber type, reconnaissance type, etc.[2][3][4][8] It is also produced in large numbers and together with its variants are actively exported to non-AEU member countries, PMCs (Private Military Companies) and even landed in the hands of terrorist groups such as La Edenra.[2][3][8][14]

Usable only in Flight mode, this small caliber projectile weapon has a rapid rate of fire and is mounted in the pointed section above the linear rifle.[4][5][12]

Mounted on the left forearm, it is a rod-shaped defensive armament.[5][10][15][16] It is able to deflect/ricochet enemy's projectiles via rotary motion. Typically not equipped when the AEU Hellion Perpetuum is launched in Flight mode.[12][14][15]

A dagger-like melee weapon, the one used by the AEU Hellion Perpetuum has a blade made of super-hard carbon that extends from the handle during use.[4][10][11] By vibrating at a high frequency, the blade is able to display excellent cutting capabilities.[10] Unlike the AEU Enact's, it does not have a plasma sword function.[4][8][10] A larger version with an extendable or foldable blade can be stored in the weapons bays located on the legs' shins.[10][11]

It is known that luminescence patterns can be generated on the left side of the face by facial sensor elements.[4][10][11] Presumably for intimidation and optical communications, it is unclear if this ability is only limited to the left side.

The AEU Hellion Perpetuum was the main mobile suit of the Advanced European Union (AEU) as of AD 2307, although it was beginning to be replaced by the newer AEU-09 AEU Enact. When the AEU Enact's demonstration was interrupted by the appearance of Celestial Being's GN-001 Gundam Exia, the AEU military scrambled multiple AEU Hellion. However, these units were quickly shot down by Gundam Exia with support from the GN-002 Gundam Dynames. The Celestial Being used this event to show to the world that AEU has more military power than allowed under the treaty.

The AEU later conducted a joint military exercise with the Republic of Moralia and PMC Trust. This also served to attract the Celestial Being's attention and to attempt a capture of one of the Gundams. For the exercise, the AEU mainly deployed the AEU Hellion Perpetuums, while the PMC Trust and Moralia deployed the variant unit, the AEU-05G AEU Hellion Ground Type, in addition to the normal AEU Hellion Perpetuums. Moralia also deployed the AEU-05 AEU Hellion Reconnaissance Type. Despite having over 100 mobile suits, they were no match for the four Gundams. After the events in Moralia, the terrorist organization, La Edenra, bombed multiple places around the world to force Celestial Being to stop their armed interventions. With some help, Celestial Being discovered the organization's three active bases and sent the Gundams to destroy them. One of the bases was guarded by three custom colored AEU Hellion Perpetuums, but they were easily dispatch by the GN-002 Gundam Dynames.

Eventually, the AEU worked with the Union and the Human Reform League to capture the Gundams. The three blocs conducted a joint military exercise and purposely allowed a group of terrorists to attack a military base nearby to lure the Gundams. As the Gundams took the bait, the three blocs attacked. During the operation, AEU deployed several variants of the AEU Hellion Perpetuum, including the AEU-05 AEU Hellion Bomber Type and the AEU-05 AEU Hellion Capture Equipment Type. A squad of the AEU Hellion Capture Equipment Type, led by Patrick Colasour's AEU-09T AEU Enact Commander Type, managed to capture the GN-005 Gundam Virtue. However, they were later shot down by the GNW-001 Gundam Throne Eins that arrived to save the Virtue.

By AD 2312, the AEU Hellion Perpetuum was vastly outdated but was still used by the Earth Sphere Federation Army, albeit not in the frontlines. A number of units were also acquired by the anti-Federation organization Katharon. The AEU Hellion Perpetuums of both factions were seen in action during the Break Pillar Incident, where they worked with numerous other mobile suits to shoot down the falling outer wall pieces of the damaged orbital elevator, La Tour, reducing the destruction caused to the city at the elevator's base.

A special variant of the AEU Hellion Perpetuum for capturing a Gundam, it was deployed during the joint military exercise conducted by the AEU, Union and HRL in the Taklamakan Desert.[4][10][15][19] It can be equipped with a pair of special electromagnetic shields, the linear shields, which release substances that induce magnetization.[4][10][15][20] Furthermore, by controlling the shields' magnetic properties, four AEU Hellion Capture Equipment Types can surround and trap a Gundam within an inescapable force field.[4][10][15][21] As long as their power supply holds up and the four AEU Hellion Capture Equipment Types maintain their formation, nothing can escape from this field.[21][22]

The AEU Hellion Capture Equipment Type's main thrusters are enlarged due to the addition of the large linear shields.[8][10] However, its mobility is still affected and its flight capability is merely a means of movement.[10] The linear shields are attached to the waist via movable joints, and when not in use during flight, they swing upward for mounting on the attachment points on top of the shoulders.[4][10][15] Units armed with linear rifles and sonic blades, and without the linear shields, were deployed as escorts after the GN-005 Gundam Virtue was captured.[20][22]

Based on the AEU Hellion Perpetuum's flight mode, this variant is outfitted for anti-ground attacks.[4][5][11][19] A large container for bombing ground targets is attached to its rear and both wings have container-like parts, but it is unknown if they are added fuel tanks or bombardment equipment.[4][5][10][11] Its design did not consider operation in MS mode, with its right and left manipulators replaced by internally mounted 60mm machine gun and rocket launcher respectively.[4][5][10][23] Multiple AEU Hellion Bomber Types participated in the joint military exercise in the Taklamakan Desert.[15]

Developed for reconnaissance, it is used for collecting intelligence and to search for enemy units.[4][5][10] One such unit in the Republic of Moralia's colors spotted the four Gundams as they arrived to intervene in the joint military exercise between Moralia, PMC Trust and AEU.[14] The AEU Hellion Recon Type is equipped with a large disc-shaped radome at the top, has enhanced radar functionalities, and a gun sensor in place of the linear rifle.[4][8][10][23] Its only armament is the 20mm machine gun mounted in the pointed section above the gun sensor.[4][10][23] Based on the AEU Hellion Perpetuum's flight mode, it does not seem to be heavily modified and its shape is closely similar to the original's.[10][11][19] Although it retains parts like the manipulators, it is unknown if the AEU Hellion Recon Type can transform into MS mode.[10]

A variant based on the AEU Hellion Perpetuum's flight mode, with the majority of the upper torso replaced by an elongated, radome-like device.[11] It is sometimes classified as an alternate model of the AEU Hellion Recon Type.[5][8][23] 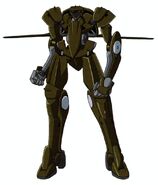 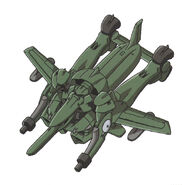 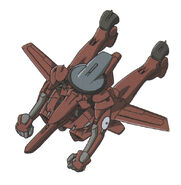 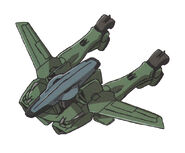 Retrieved from "https://gundam.fandom.com/wiki/AEU-05/05_AEU_Hellion_Perpetuum?oldid=455217"
Community content is available under CC-BY-SA unless otherwise noted.