Developed after the battle of Edmonton, this export-orientated mobile suit was created by Gjallarhorn to meet the demands of the four economic blocs that were seeking to secure their defensive capabilities.[1][2] Also sold to civilians, the Hloekk Graze is a low-cost version of the EB-06 Graze and is smaller than standard mobile suits due to the use of a simplified Graze Frame.[1][2][3] However, this adversely affected its performance, causing it to be inferior to the Graze.[4] Its weapons are also simplified version of the Graze's.[2]

Although a monkey model, the Hloekk Graze does have a unique weapons bay integrated into its enlarged head unit as well as sufficient equipment and performance for the economic blocs that are inexperienced in fighting.[2][3][4] Furthermore its control is simple, making it easy to operate for the inexperienced pilots of the economic blocs.[1][2] For this reason, the Arbrau Defense Force used it as their main mobile suit.[1]Gjallarhorn's Arianrhod Fleet also uses the suit, but in a non-combat, support capacity for their Dáinsleif Type Graze.[2][4] The Hloekk Graze is also used in the Venus colonies for repair work.[5]

Stored in the head-mounted weapons bay, these small missiles are fired from the four hatches located on top of the head.[2] The missiles cannot deal serious damage to a mobile suit, but are effective against mobile workers.[6] The missiles can be replaced by signal flares and the like.[2]

The suit's main ranged weapon. This compact gun's main and sub grips can rotate to the left or right.[2][4]

The suit's main close combat weapon, it is smaller than the Graze's battle axe and can be stored on the waist rack.[2][4]

The Hloekk Grazes were heavily used by the Arbrau Defense Forces and some Tekkadan Earth branch members during the Arbrau-SAU war. When the Gjallarhorn team lead by McGillis Fareed intervened, the Arbrau Defense Forces' Hloekk Grazes were easily defeated due to their inferior performance and inexperienced pilots. However, McGillis' intervention was soon stopped by Galan Mossa's mercenary squadron and Tekkadan Earth branch.

Later, part of the Arianrhod fleet commandeered by Iok Kujan deployed Hloekk Grazes with a purple color scheme during the assault on the Turbines. These Hloekk Grazes served as Dáinsleif bullet loaders for the Graze (Dáinsleif Mounted) units. 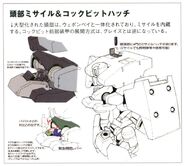 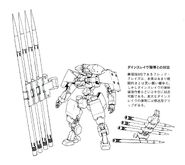