The AC-01 Miss Sazabi is a Gunpla from the anime series Gundam Build Fighters. Based on the MSN-04 Sazabi, it is piloted by Aila Jyrkiäinen.

A customized Gunpla owned by Aila after she defected from Nemesis, it is built according to her experience in Gunpla Battle and with some help from China Kousaka. Modified from the MSN-04 Sazabi from Mobile Suit Gundam: Char's Counterattack, Miss Sazabi has a more feminine look, a new coloring, new leg-mounted thrusters, and back-mounted thrusters which are derived from Sazabi's shoulders. As a result of these modifications, the unit has become lighter, but still retains the powerful thrust of the original Sazabi.[1] The thrusters also provide Miss Sazabi with high mobility and it can close in onto enemy units quickly for melee combat. It is well armed with several close combat weaponry and like the NMX-004 Qubeley Papillon, it is also equipped with funnels for conducting all-range attacks.

A beam saber emitter is installed in each of the foot guards, the generated beam blade can enhance the suit's kicking attack.

Miss Sazabi is also equipped with an unknown number of funnels that are stored in the funnel container located in the rear skirt armor. What the funnels look like or how they function is unknown.

Miss Sazabi's main close combat weapon, it is modified from Sazabi's beam tomahawk and has an additional beam blade emitter extending horizontally from the bottom of the grip.

The Sweet Sword can also function as a ranged weapon, and the beam shots are fired from its central round emitter.

Modified from the Sazabi's original waist skirt. it's a a small shield mounted on the left arm. It is the suit's main defensive equipment and stores a beam saber.

A handheld beam weapon that is used for close combat. Despite its name, it functions more like a twin beam saber as it can emit a beam blade from each end. 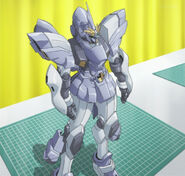 Retrieved from "https://gundam.fandom.com/wiki/AC-01_Miss_Sazabi?oldid=407369"
Community content is available under CC-BY-SA unless otherwise noted.