The A/FMSZ-007II Zeta is a mobile suit derivative of the MSZ-006 Zeta Gundam. It was designed by Kazuhisa Kondo and has appeared in several of his works, including Mobile Suit Gundam: The Revival of Zeon.

The A/FMSZ-007II Zeta was developed as a mass production, long-range variable mobile suit capable of both atmospheric flight and space flight. Based on the original MSZ-006 Zeta Gundam, the overall design was modified to meet Earth Federation Forces standards. To cut production costs, armor sections were omitted from the frame, thus saving considerable weight as well. It featured variable geometry wings with underwing drop tank racks. Designed purely for long-range bombardment, the A/FMSZ-007II emphasized operation time and firepower at the expense of protection of the MS, resulting in poor performance on the ground. Despite this inherent design weakness, the A/FMSZ-007II proved versatile in the ground attack role, with weapons fitted ranging from missiles to bombs. Typically the A/FMSZ-007II flew with underwing fuel tanks for long sorties, and is able to fly to any point in the world. Additionally, it was capable of making orbit on the power of its basic engine thrust. There were two wing configurations used in the A/FMSZ-007II's waverider mode; one for use in the atmosphere and another for operations in space.

In UC 0092, A/FMSZ-007II Zeta units operated by Advance Squadron JG54 and JG27 were deployed from the G-class battleship Glorious in high earth orbit on a descent operation to the Scandinavian peninsula, where they conducted bombardment operations against Neo Zeon forces. 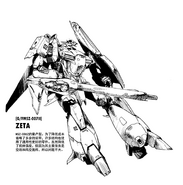 G/FMSZ-007II from the Line of Shadow Mechanical Manual