8 is a supporting character from Mobile Suit Gundam SEED Astray.

Originally recovered from a drifting spacecraft by Lowe Guele, 8 became a member of the Junk Guild and helped them with their salvage work. After Lowe and his group discovered the MBF-P03 Gundam Astray Blue Frame, 8 supported him from inside the cockpit, allowing him to pilot it despite being a Natural. It continued to do so after he switched to the MBF-P02 Gundam Astray Red Frame.

8 has the ability to pilot any mobile suit it comes upon. It argues with Lowe about how to upgrade mobile suits and often engage in friendly banter with him. Usually, 8 helps Lowe out during combat by giving suggestions on what decisions are best for him. According to itself, it has records on humanity's entire history of warfare. It communicates with people through the words displayed on its screen, and can express its feelings or mood by varying the way the words are shown. Unlike the vast majority of computers at the time, 8 is not a quantum computer, making it immune to the effects of the quantum computer virus spread by the NMS-X07PO Gel Finieto and the ZGMF-X12A Testament Gundam. 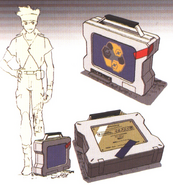