29H-A-MS Murphy is a transformable mobile suit that appears in the anime Mobile Fighter G Gundam.

A variable mobile suit belonging to Neo America. It has the ability to change into a combat helicopter. It excels in mobility, but has difficulties in cruising range and armament.

A pair of Murphies were used when the Neo America Department of Defense officials Shawn Douglas and Kennedy Grumman attacked Domon Kasshu, who was on foot at the time, with these machines. Their aim was to eliminate him and secure an unfair victory for Chibodee Crocket, however once he learned of their unfair tactics, Chibodee attacked the two, buying time for Domon to enter the Shining Gundam. Chibodee and Domon each destroy one of the two Murphys used in the attack. 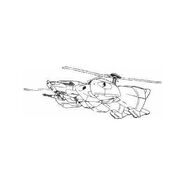 The 29H-A-MS Murphy in helicopter mode.