The stronger, rival brother machine of the 最強機動 Gundam Tryon 3, it was based on a wild story that Minato Sakai had in one of his dreams.[1][2] Minato refers to it as the 'Adult's Tryon 3'.[1] Its weapons and capabilities were based on those of the Tryon 3's, with some of them enhanced, and the word 'Black' added to the front of most of its weapons' names.[2][3][4] Unlike Tryon 3, the Dryon III can be controlled by one person even when it is separated into its three component machines.[5]

Dryon III's version of the Tryon 3's liger glare, a spiraling yellow and green beam is fired from the eyes of the Riku Dryon on the suit's chest.[3] This attack can only be used in the combined Dryon III form.

A pair of back-mounted beam cannons, the black double cannonade has a long attack range and high attack power. The double cannonade flips forward when deployed, and can be used in conjunction with the black liger glare for a stronger ranged beam attack.[3]

Mounted on the barrels of the black double cannonade, the pair of hyper beam sabers used by Dryon III can combine into a double edged weapon.[3]

A powerful beam cannon mounted in the center of Dryon III's forehead.[3]

Dryon III can detach its V-fin and use it as a boomerang that is capable of slicing the opponent.[4] It is an enlarged version of the Tryon III's boomerang stagger.[4]

Just like the Gundam Tryon 3, the Gundam Dryon III is made up of three components:

In Gundam Try Age, the Gundam Dryon III's backstory is that it's a copy of the 最強機動 Gundam Tryon 3 made by an evil scientist known as Cyborg Dr. Gundam Mk-II for resurrection of the Titans. He also has his comatose son become its pilot, hoping that the Minovsky particles can cure him.

According to the backstory provided by Minato Sakai in the Hobby Hobby Imaging Builders, Gundam Dryon III is created by villains based on Gundam Tryon 3's stolen plan and is the stronger of the two. However, it recognize Tryon 3 as its brother and ultimately self-destruct to save Tryon 3. 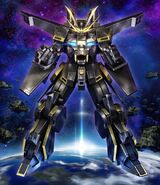 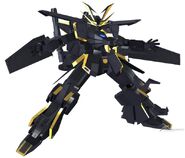