The 侍ノ弐 Sengoku Astray Gundam (戦国アストレイ頑駄無, Sengoku Asutorei Gandamu?) is a mobile suit appearing in the anime series Gundam Build Fighters. Based on the MBF-P02 Gundam Astray Red Frame, the Gunpla is built and controlled by Nils Nielsen.

Based on the MBF-P02 Gundam Astray Red Frame that appeared in the Gundam SEED Astray series, this Gunpla is built by Nils Nielsen and embodies his love of his Japanese heritage. Aesthetically, it greatly resembles a samurai, with an enlarged V-fin that is modeled after the Crest-horn and additional facial scrupling that is modeled after a men. The Red Frame's original faceplate is hidden underneath this extra plating and can be revealed if the extra plate is destroyed. Armed with two swords and a shield, the Sengoku Astray is also uparmored, with the new shoulder armor containing a pair of hidden arms and thrusters at the back. With its swords, the Sengoku Astray can not only launch shock waves, but also cut through beam attacks and particle barrier. The Gunpla has a special melee attack, the ‘Particle Fa Jin', that allows it to destroy an opponent from within.

The Sengoku Astray's primary weapons, called Kiku-ichimonji and Kotetsu, they are stored on top of the shoulders when not in use. By swinging the swords, the Sengoku Astray can launch shock waves, giving it ranged attack capability. This attack is strong enough to split the beam blast fired from OZ-00MSVa Tallgeese Valkyrie's Mega Beam Cannon. The blades of the Samurai Swords have a particle alteration coating, and can be used to block beam attacks as well as cut through particle-based attacks and barriers. The Samurai Swords can also be used as throwing weapons.

A shield in the form of a demon face, it is normally mounted on the Sengoku Astray's back to provide rear protection. It is dismounted when additional frontal protection is required, such as when the suit is faced with heavy frontal attacks. This rarely happens as Nils prefers to use the Samurai Swords for both defense and offense. The "eyes" of the shield can function as thrusters.

A weapon given to the Sengoku Astray at random during the Original Weapon Battle. The yo-yo's string was used to wrap around an enemy's neck, and then pluck to emit an electric shock that knock the enemy out.

Used by Sengoku Astray against the Mocks, it can also be used as a throwing weapon.

Another weapon used against the Mocks, it has three thrusters located at the back of its head. When the thrusters are activated, they increase the hammer's power and allow it to easily disperse multiple enemies.

Built by Nils for the Gunpla Race segment of the Gunpla World Tournament, it is a horse-like support unit originated from Mobile Fighter G Gundam. The Sengoku Astray rides on top of it during the race.

Sengoku Yoroi refers to the new armor parts on the shoulders (which can also be referred to seperately as 'Kata Yoroi') and around the knees that Nils created for the Sengoku Astray. They remedy the lack of armor on the original Gundam Astray Red Frame. The armor placement takes into account Nils's battling style and are fitted in areas where the suit is likely to get hit. The black shoulder side armor can also transform into a pair of arms that can hold the Samurai Swords, or be used to perform the 'Particle Fa Jin' attack.

A special coating that Nils applied on the Samurai Swords' blades. This coating changes the swords' Plavsky Particle band based on the direction of the blades, allowing them to cut through beams. The coating also allows the sword's Plavsky Particle band to match the Battle Field's control particle band, granting the Sengoku Astray the ability to cut through particle-based barrier. However, this coating can be a double-edged sword, as during the battle with Star Build Strike, the particle band was transformed by the acceleration from the Build Knuckle attack and this caused the blades to break as they were not adjusted to the new particle band.

A melee attack derived from Chinese martial arts, it allows the Sengoku Astray to send its own Plavsky Particles into the opponent’s Gunpla and destroy it from within. However, the Particle Fa Jin can be stopped if the Plavsky Particles cannot flow through. This attack can be performed using the main arms or the hidden arms.

For the history of the Sengoku Astray Gundam, go to Nils Nielsen's page. 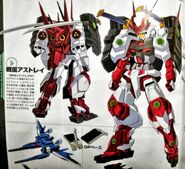 Details on the Sengoku Astray

Close-up at the Sengoku Astray's face 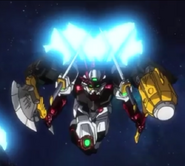 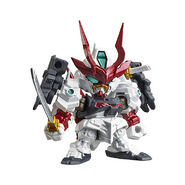