∀ Gundam: Wind of the Moon

∀ Gundam: Wind of the Moon

1
∀ Gundam: Wind of the Moon (∀(ターンエー)ガンダム 月の風, Tān'ē Gandamu Tsuki no Kaze?) is a manga written and illustrated by Akira Yasuda. It is a side story to the ∀ Gundam TV series. The manga was serialized in Gundam Ace between March 2004 to March 2005. Kadokawa Shoten released the compilation book on June 26, 2007 in Japan.

The story takes place in the year Correct Century 2341, showing the life of Loran Cehack in training for Dianna Soreil's counter landing operation. 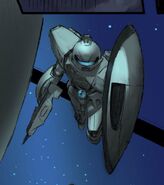