∀ Gundam is also the last of the Gundam metaseries (not counting the compilations and future video game cut scenes) to be hand painted on cels. 2002's Gundam SEED was the first series to use digital coloring.

For two thousand years, a separate race of humanity has lived on the moon. Known as "the Moonrace," their technology is leaps and bounds beyond those that stayed behind on the Earth's surface. Now seeking to return to their original home, the Moonrace send three teenagers – Loran, Keith, and Fran – down to Earth on a reconnaissance mission to test the viability of its environment.[3]

After spending a year on Earth, Loran has become good friends with Sochie and Kihel, daughters of the prestigious Heim family, and he looks forward to fully integrating into Earth society. But before Loran gets the chance to make his report, the Moonrace launch a surprise attack. Earth's primitive airplanes are no match for the superior power of the Moonrace's mobile suits. However, in the midst of the initial attack, Loran and Sochie uncover a long-forgotten relic: a white mobile suit. As a Moonrace, Loran is quickly able to grasp the basics of piloting it, but by doing so, he inadvertently places himself in the middle of a war.[3]

Relationship with other Gundam series

Turn A Gundam has been cited by Director Tomino and other sources as a show that would unify the stories from the various Gundam series into one. Throughout the show, mobile suits resembling those from the eras depicted in previous Gundam shows and indicated to be preserved by nano machines for thousands of years, including as those of the Universal Century, are excavated by the show's various factions. In Episode 43, this plotline comes to a culmination as the history of the Correct Century timeline is shown in a collection of clips known as the Dark History (黒歴史, Kuro Rekishi), which is revealed to be events that took place in different Gundam series prior to Turn A Gundam, thus making those events part of the Correct Century timeline's history.

The book 2001 Correct Century, A Bibliographical Study of "Dark History," printed in black pages in front of the Universal Century Gundam Officials Encyclopedia, is supposedly uncovered by a fictional Lecturer in Black History named Yokk Wakk Onimott during Correct Century 1993. Onimott spends two years to fix the broken pages, five years to interpret the language, and a year to find a publisher. He states that the book was first printed around 3,000 years ago by the Rhea branch of the Earth Federation Government University.

Included in the book is a picture drawn by Kunio Okawara showing a mobile suit supposed to be MS-04 as a S.U.I.T. project of the Zeon forces in UC0072~0075. It was supposedly found in C.C. 1993 in the mountain cycle Library A-a. The white page introduction by another fictional writer, Minaka Junkers, an economy assistant professor of the Rhea branch of the Earth Federation Government University, states the book was published in U.C. 0100 to celebrate the Centennial anniversary of the Universal Century. Thus, it is officially claimed that the Universal Century is a time before Correct Century, possibly around 3,000 years before the story of Turn A begins.[4]

∀ Gundam takes place in the year Correct Century 2345 (正暦2345年, Seireki 2345, or CC 2345), in a different calendar system than the previous Gundam projects. Seireki is a wordplay on the Japanese term for the Common Era (C.E.) Western calendar system (西暦; also pronounced Seireki). The English acronym "CC" is Correct Century (コレクトセンチュリー) in the official Japanese ∀ guide book, and Correct Century in English in the 2001 Correct Century: A Bibliographical Study of "Black History" as the black paged introduction of Gundam Officials.[5]

After the end of Mobile Suit Victory Gundam in early 1994, Yoshiyuki Tomino took a five-year hiatus from Gundam anime (although he created the story for the Mobile Suit Crossbone Gundam manga during that time). In 1999, he returned to the Gundam franchise with the 50-episode series ∀ Gundam (read as Turn A Gundam) as part of Sunrise's "Gundam Big Bang" 20th Anniversary celebration. Set in Correct Century (CC) 2345, this series tells the story of a war between space colonists calling themselves the Moonrace who wish to colonize Earth, and the Earth Militia forces, which use the ancient ∀ Gundam to retaliate.

∀ Gundam is a dramatic departure from the franchise in many ways. Instead of being set in an era of high technology, it is set in a future that has regressed to the early 20th century. Also, the unorthodox design of the title suit comes courtesy of American designer Syd Mead, best known for his work on the film Blade Runner. The series also features the musical talents of Yoko Kanno, who previously worked on Macross Plus, Cowboy Bebop, and Tomino's own series Brain Powerd. The series finished its run in early 2000, and in 2002 Tomino directed two compilation films, entitled Earth Light and Moonlight Butterfly.

The series is available on DVD and Blu-Ray in Japan, but due to the problems with licensing Gundam series, there seemed little hope for a release until RightStuf Inc. partnered with Sunrise in 2014. On March 11, 2015, Right-Stuf & Nozomi Entertainment announced that Part 1 of the series would be available June 30, 2015.[1] In 2016, a high-definition Blu-Ray release of the entire series took place, spurred by incredibly-strong DVD sales.

The second part includes an exclusive interview with Syd Mead which was originally planned to be included in the scrapped Bandai Entertainment release.[6] 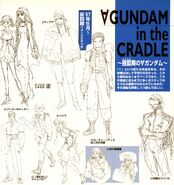