This article is about the Man-Machine. For the novel this unit is named after, see Gaia Gear.

The α000-0001 Gaia Gear α (aka Gaia Gear Alpha) is the titular Man-Machine of Gaia Gear, piloted by Afranche Char.

A prototype transformable Man-Machine developed by Metatron, the Gaia Gear α is a ultra high-performance unit built during the pinnacle of Universal Century era technology. The Gaia Gear α is powered by four Minovsky Ultracompact Fusion Reactor. Each reactor is even further miniaturized than those seen in the Formula Project mobile suits, and uses a new form of Minovsky Fusion known as "ø(psi)-based fusion-cycle". This new type of Minovsky Fusion increases the reactor's output threefold, allowing a smaller reactor (or in the Gaia Gear α's case, four of them) to generate more power than a single larger reactor.

The Gaia Gear α is designed to be the most advanced Man Machine, and as such it carries a variety of weapons and technologies. Its Fire Control System is capable of near infinite scaling and data control, meaning the Gaia Gear α can engage nearly any number of enemy targets with as many weapons as it can physically carry.

The Gaia Gear α's frame is composed of multiple movable parts and components, which can be replaced with newer parts depending on the circumstances, making maintenance of the unit relatively easier. The Gaia Gear α also features a miniaturized Minovsky Craft System, which partnered with its thruster output, allows the unit to travel at Mach II to Mach III speeds in Earth's atmosphere. The Gaia Gear α's cockpit canopy is composed of glass with built-in LCD screens that display camera feeds in 3D, while making the canopy opaque when looking in from the outside. The Gaia Gear α can also transform into a flight form for atmospheric entry.

The Gaia Gear α is equipped with a Psycommu System, mountable Funnel Launcher pods, and an improved shock-absorbing system that utilizes Minovsky technology.

The Gaia Gear α carries modified needle missiles, specifically designed to pierce the Gids Geese's armor. The tips are heated so that they cut through armor and then detonate.

A pair of Beam Guns concealed under the arms.

The Sand Barrel is an anti-missile/funnel weapon, which spews metal objects into the path of said weapon. It is capable of destroying incoming missiles, and hindering funnel movement, and in some cases, damaging the funnels themselves.

The Gaia Gear α is equipped with a Psycommu cockpit that allows a Newtype pilot to amplify his thoughts and brainwaves over long distances. In addition, it allows the pilot to control the Man-Machine with their thoughts. A Psycommu receiver is located inside the pilot's helmet. Its description is almost identical to that of a Psycho-Frame cockpit. It is the only Man-Machine to use such a system.

A barrier that releases Minovsky particles that surrounds the Man-Machine. It does not operate indefinitely, and can block beams as well as physical projectiles such as missiles. However, the Minovsky Barrier does not provide protection against explosions. It can also be used to protect the Gaia Gear α during atmospheric entry.

Equipment used by the Gaia Gear α in its waverider mode to extend its flight range. Allows for increased maneuverability and flight in Earth's atmosphere and atmospheric exit. It also features internal dummy balloons and sand barrels.

Developed in U.C. 203 by the Earth Federation Forces, Metatron captures the α000-0001 Gaia Gear α and uses it to rescue the clone of the Char Aznable, Afranche Char, from the custody of the Man-Hunter Agency with Afranche Char becoming the new pilot of the Gaia Gear α.

An early test model of the Gaia Gear α, the Test Unit is painted in Gundam colors, and was designed with a Gundam-type head with the intention of equipping a High Mega Cannon in its the forehead. Two such units were constructed as proof of concept machines befoe the eventual development of the Gaia Gear α.

Gaia Gear Alpha Raiden is an MSV of Gaia Gear α that incorporates the latest in stealth technology. It features sensor-invisible materials and a low-visibility paintjob. In addition, Minovsky Thrust Boosters were added, to improve its overall performance in the atmosphere in its flight form.

The Gaia Gear Beta was under construction prior to the events of the Gaia Gear story. The unfinished frame was scrapped due to the end of the war and disbandment of Metatron. 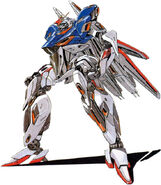 On the cover of Gaia Gear volume 2 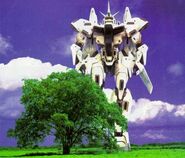 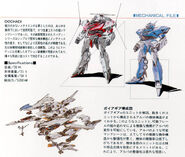 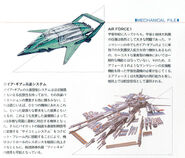 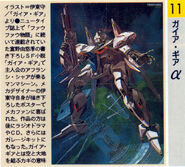