this is the coolest scene in final episode of season 2. But sadly Mika & Orga are both dead :< 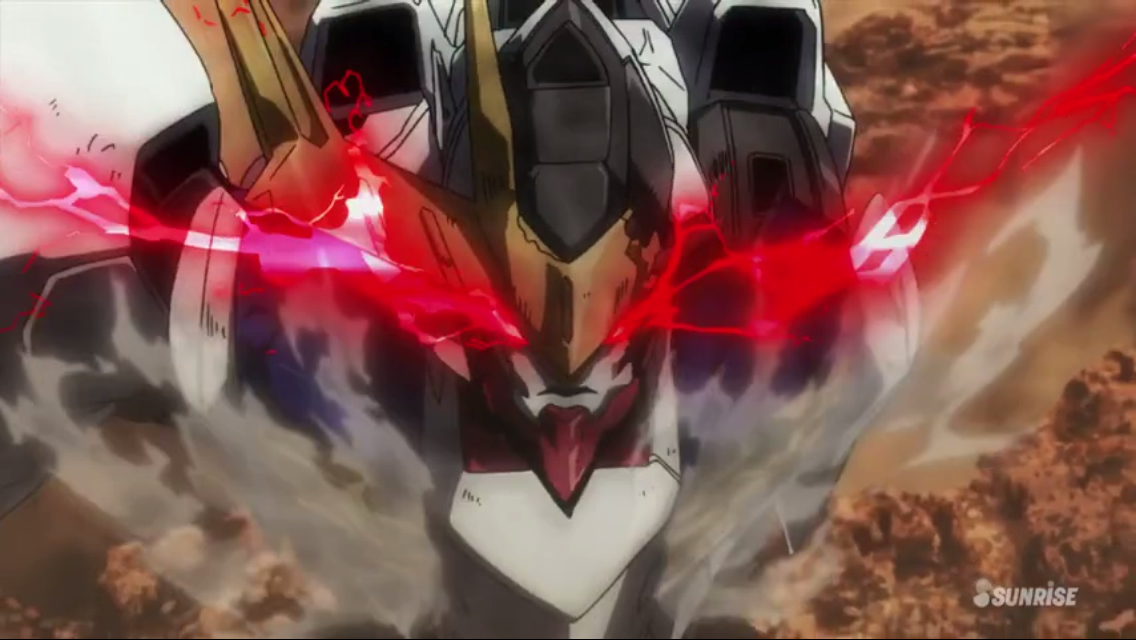 FUCK IBO that shit broke my heart way to mich with that b.s. blonde that should have died. :,(. We don't talk about IBO man it's too soon.

Can you watch your language man, there are kids on here, and the first season was great to me, I just hated the bad guys using illegal weapons and all the main characters dying and majority of the people that lived should of died 😒

No no I can't, and yeah that's exactly what I meant. So stupid to kill off the best of the best. Sad story man sad story.

If you take a step back and look at the story in a more objective prospective Gaelio is the hero of the story. He was a virtious character throughout the whole series, he did everything by the book, and acted in the interest of the people around him. McGillis was a misguided and put everyone who followed him from season 1 until the end on a chopping block to push his goals.

Thank you for your input Mindless, but I Think Mcgillis was a more heroic character than Gallio

Mindless what were you watching. Gaelio was the tragic revenge hero, Mcgilis was the ideological hero who made sacrifice for his vision and goals. The issue is that Galahorn was curropt and Mcgilis needed to us Gaelio to accomplish his goal, he spared him even and Gaelio and Ein became the vengeful heros. It's literally Mcbeth in a way.

I respectfully disagree. From my experience watching the series McGillis started out as a mysterious character with a lot of talent and charisma, but as the series went on a lot of his goals were pretty half baked. Taking a look at McGillis next to Rustle and how they conducted themselves in accordance with their goals (more McGillis' goals since Rustle doesn't state his goals).

-Opportunities for progress and promotion to people who were raised in disadvantaged families.

-The independence of Mars, it's resources, and it's people (this was more to win over the support of Tekkadan).

McGillis didn't have a solid plan (or an explicitly stated plan) on how he would solve that corruption. But what he did was kill or lead to the death of literally everyone that followed his lead. He allied with a known mafia group (Tekkadan), set up the resistance groups just to have them die, set up Eins to be a propganda piece to bring down the status of Gjallahorn, and his rebellion began without full understanding any contingency for the propganda that Rustle and Gaelio pushed against his cause. Naze was recently killed off by the railgun squad, and he didn't prepare for that same unit to be used against him? (That same organization that he knew from the beginning to be corrupt and willing to use these tactics). It felt like his whole plan hinged on him obtaining Bael and everyone else falling in line with no plan to deal with opposition.

Rustle however is an example of a character in power that was able to use his position to meet all (or most of) McGillis' goals. During McGillis' rebellion he removed the Gjallahorn families from power (the ones he took hostage), this allowed for Rustle to take full control after the events of the series. From there he made Gjallahorn more democratic, allowed for Mars to have more control of their resources and independence. Not only that he was very popular among his troops, Julietta stating that she would never have been able to get to her rank without Rustles leadership due to her commoner status. In the end he was able to accomplish all of McGillis'goals.

It's easy to hate on Rustle because he is the antagonist to our main characters, but his actions were that of a forward thinking leader. Notice that the pov for most of this story is Tekkadan and McGillis, so most of the scenes with Rustle was him acting against the good of our protagonist. if there was a bit of a tone shift when it came to him, I believe that he can be a very sympathetic character (not saying he didn't have any corrupt dealings). He was a leader that understood change has to he matched with order, because in the long run McGillis' rebellion had the potential to lead the world into chaos as well as it could peace.

I loved Tekkadan, they were the amazing underdogs that ran on pure strength and willpower, but the moment Orga accepted the "King of Mars" title from McGillis, they were way above their heads.

Tl Dr: McGillis is a talented man with great ambitions, but had a half baked rebellion that killed everyone who believed in him.

Sorry if that was a bit of a rant, I didn't like McGillis very much as a character, not because he was poorly written but because his character brought more chaos than it did good.

So look IE. Mcbeth. But I do agree to the rant, however is still see McGilis as a tactical leader. In season 1 the people that followed him, he admittedly used as pawns and set them up exactly as he saw fit. He became radical and messy in Season 2 compared to Rustal but he did place some tactical wins. He however was all about the strength of Bael, and it cost him. He also should have killed certain people that he spared, such as Gaelio, and the dude that always needed saving on Rustals side. He deserves more credit even though ultimately he failed in his plans.

Regardless of whether or not McGillis was a good character who thought things through well enough or not, all of the suits he piloted were not used correctly. I wanted to see more of the Grimgerde, and while seeing it be "upgraded" into the Helmwige Reincar was cool and all, I still wish that it had a but more screen time. Bael was just so underwhelming. Like, they hyped it up so much, and then it was just an average-looking and performing Gundam Frame. Wish it had, like, a more regal look and weapon set. Like a big longsword and shield or something. Maybe some gold accents around the suit itself. Although seeing that McGillis actually used the research done on Ein was kinda nice.

See why I said we should do the same thing with IBO season 2 as what we’ve done with Dragon Ball GT..?